Duddeston Hall was the medieval moated manor house of the Holte family before their move to Aston Hall in 1631. The site in Hindlow Close may well be the location of 'Dudd's farm', an Anglo-Saxon name first found in a charter of 963 AD in which the King Edgar granted land here and at Arley near Coventry to his thegn, Wulfget. Duddeston is one of Birmingham's oldest recorded names.

The manor probably descended from the beginning with that of Aston of which it was part. William Dugdale discovered the amount of annual rent owed by the lord of the manor to his feudal lord:

Henry de Erdington did his fealtie to Joane Botetorte Lady of Weoleye, as coheir to Someri Baron of Dudley, on S. Mark's day for this place, together with Aston ; mention being made of their tenure by a pair of gilt Spurs, or six pence.  William Dugdale 1656 The Antiquities of Warwickshire


The hall was occupied from 1365 by John atte Holte who bought an estate here to add to his Nechells holding; he also had lands in Bordesley and bought Aston manor in 1367. The manorial status of Duddeston is unclear. Other estates here were also referred to as manors, but by the early 1500s the Holte's holding was generally regarded as the manor of Duddeston with Duddeston Hall being the manor house. All these estates lay within the extensive parish of Aston.


By Stuart times the hall had thirteen bedrooms, a gallery, chapel, gatehouse, and extensive outbuildings. The great hall and principal rooms were richly hung and furnished. And the family continued to thrive in the 16th century, thanks to the efforts of Thomas Holt, one of Henry VIII's commissioners part of whose job was to oversee the dissolution of the monasteries. He seems to have taken the opportunity to spot a bargain when he saw one. It was his grandson and namesake who built Aston Hall. After that Duddeston continued in use as the dower house; indeed the Holtes maintained their connection with the manor until the late 18th century. (See also Aston.)


During the early 18th century a neo-classical façade was built around the timber-framed hall. The hall was then owned by Andrew Butler and run as a hotel for gentlefolk who did not want to stay in the centre of Birmingham, which was by that time a smoky industrial town.

From about 1750 Vauxhall Pleasure Gardens were laid out in the grounds of Duddeston Hall, still set in a pleasant rural location away from the town and overlooking the wooded valley of the Rea.

The medieval moat platform became a bowling green and a variety of pursuits took place here including fairs, concerts, balloon ascents, fireworks, balls and cock-fighting. The pleasure gardens consitnued but the hall itself was demolished in 1781.


At this time there were a handful of farms in Duddeston and a scattering of cottages. But by the beginning of the 19th century urban development was beginning to reach this rural area, and by the middle of the century the population of Duddeston with neighbouring Nechells (historically usually considered together) had passed 20 000 inhabitants.

With increasing urbanisation and industrialisation of the area the gardens lost their rural appeal and were closed in 1850. The land was subsequently sold to the Victoria Land Society, a mutual building society.

Trade increased and the mill was rebuilt c1570 with three pairs of stones. By 1744, in common with many local mills, it was being used more profitably for metal rolling, blade making and gun-barrel boring by James Farmer.


Gun-maker Samuel Galton, who lived nearby at Duddeston House, rebuilt the mill which continued to make gun barrels until 1888. The mill's weir caused problems in Deritend by holding up the raw sewage discharged from Birmingham a mile upstream. Disastrous floods in 1852 spread raw sewage throughout the lower town and prompted the removal of the weir.

The unreliability of a constant water supply led to the mill being converted to a steam-powered sawmill. After closure the site was bought by the Midland Railway standing as it did alongside the Birmingham-Derby line.

On the east side of Devon Street was the Galton family home. Known as Duddeston House, or later confusingly Duddeston Hall, it had been built in a neo-classical style in 1758. There were extensive grounds along the river with a lake covering 2 hectares which was stocked with exotic waterfowl. Samuel Galton Junior was a man of many interests. It was he who discovered that the seven colours of the spectrum are made up only of red, yellow and blue.


After the Galtons left in 1838 the house was used as a lunatic asylum until 1865. and with increasing urbanisation, from 1868 for the overflow of infants of St Matthew's School in Cato Street. As the population continued to increase, the building was altered the following year to accommodate a teacher's house and some 750 pupils, and was renamed St Anne's National School.

However, Her Majesty's Inspectors reported poor buildings and poor education iin 1894. The Board of Education were still demanding improvements in 1912. As part of the wide-scale redevelopment of the area the school was closed and the building demolished in 1971 with the children transferring to the new St Matthews School on Duddeston Manor Road.

In the early years of the 19th century awareness grew that large numbers, especially of the urban poor and the working class were not catered for in their localities by the Established Church. As a result, the Government set up a commission with one million pounds to spend on building churches, ostensibly in thanksgiving for the victory at Waterloo in 1815. The growing district of Duddeston had no church of its own, as it lay within Aston parish at some distance from the parish church.


And so in 1840 St Matthew's was built on what is now Nechells Parkway as the first of five churches sponsored by the Birmingham Church Society. There was so little housing development around it at the time that it was nicknamed St Matthew's in the Wilderness.

Designed in a simple interpretation of Early English style, the building marks an important stage in the revival of gothic ecclesiastical architecture, the more so because, unlike many of its contemporaries, it has survived 1960s' inner-city demolition. A photograph of 1900 shows the church with a tall slender spire.


Two more churches - St Lawrence on Dartmouth Middleway designed by J A Chatwin was built in 1867 largely paid for by Louisa Ryland, and St Anne's on Cato Street was consecrated two years later. Both closed in 1951 as major redevelopments of the area were just beginning. These churches were important not just as places of worship, but also as centres of recreation and education for adults and children. And each church had its associated school, St Matthew's being the only foundation now surviving.


In the late 20th century attending worshippers had decreased to such an extent that the main body of the St Matthew's Church was let as offices, although a portion is retained as a church.

The eastern edge of Duddeston is marked by the Birmingham & Warwick Junction Canal. Built in 1844 to avoid congestion at Farmers Bridge Locks in Birmingham, it leaves Salford Junction on the Birmingham & Fazeley Canal to run parallel to the River Rea via the five Garrison Locks down to Duddeston Mill Road. From here it runs on to join the Warwick & Birmingham Canal at Bordesley Junction. From 1929 this canal became the first leg of the Grand Union Canal to London.


District names around here have changed over the years. During the 19th century the district of Duddeston lay around the present Nechells Parkway; Ashted lay north of Vauxhall Road and Vauxhall between the Grand Junction Birmingham-Liverpool Railway and the River Rea.

Duddeston, originally a sub-manor of Bordesley which itself was a sub-manor of Aston, amalgamated with Birmingham in 1838. In 1868 the district was described in The National Gazetteer of Great Britain and Ireland as 'Duddeston-cum-Nechells [ie. Duddeston with Nechells], a hamlet in the parish of Aston, in the eastern part of the borough of Birmingham'.

Duddeston along with Ashted and Vauxhall was completely redeveloped as Nechells Green in the 1960s and the district is now centred on the local shopping centre at Vauxhall Road/ Revesby Walk. 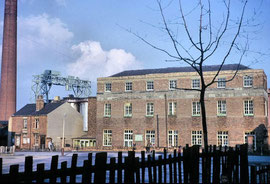 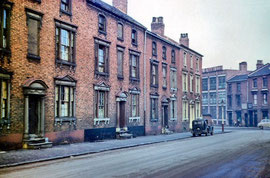 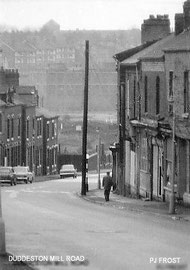 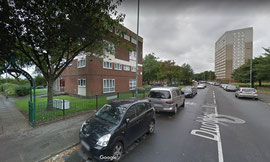 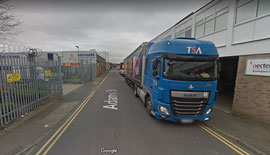