Kingesheth is literally 'the king's heath' and was part of the royal manor of Kings Norton. Kings Heath High Street is now one of Birmingham's thriving linear shopping centres. Until the turnpiking of the Alcester Road in 1767 and the consequent enclosure of the heath, this was agriculturally undeveloped heathland.

Before the turnpike, there was no High Street: the original route across the heath wound via Valentine Road, Springfield Road, Barn Lane and Wheelers Lane. From 1801 the turnpike road was straightened to its present line along the High Street.

Subsequently large private houses were built in the area by wealthy Birmingham manufacturers who could live well away from the smoke but have easy access to the town along the turnpike.


The Cross Guns on the High Street was an inn built on the turnpike in the 18th-century, and so-named after the landlord's other occupation as a gunsmith. Its central position meant that the public house was used for local meetings and, from the 1840s, as a police station and courtroom. The present mock-Tudor pub was built on a much larger scale in 1897 as the High Street evolved as the centre of the growing district. The nearby Hare and Hounds dates from 1857.


During the 19th century rural Kings Heath saw the building or rebuilding of a number of mansions by wealthy Birmingham people. One such was Priory Farm on Vicarage Road, formerly Bleak Lane. This 17th-century building, home in the 1800s of gun-maker William Deakins of Sarehole Mill, was bought in 1845 by brassfounder James Cartland with some 5 hectares of land. He rebuilt it in gothick style as Bleak House, later to be fancifully known as the Priory. On the death of Major Howard Cartland in 1940 both the house and grounds were sold for the building of King Edward VI Camp Hill Schools which opened here in 1956. Only the battlemented lodge now survives.

The Priory Trust Company was formed by the Cartland family, wealthy Birmingham brass-founders to develop their land around Vicarage Road which at that time was on the edge of built-up Birmingham. The family owned owned the Priory, Hazelwell Hall and their home, Kings Heath House, the grounds of which are now Kings Heath. In the early 1890s the Trust asked Bateman to lay out a middle class suburb on its land. Bateman's designs are in the Arts & Crafts style.

Ye Olde Red Lion public house, also by C E Bateman is a Grade II Listed building. Built in 1903 in a traditional Cotswold style, this was the first 'reformed' pub in Birmingham,a city which was an early participant in the movement to replace the small street-corner drinking dens with public houses where a man and wife could drink and eat in well-designed respectable surroundings. reformed pubs were modelled on an ideal of the village pub at the heart of its community.

Take a look. Kings Heath Park originated as the estate of Kings Heath House. During the Birmingham 'Church and King' Riots of 1791 the house here belonging to John Harwood was burned to the ground. See 1791 Birmingham Riots.

The house was rebuilt in 1832 for built in 1832 for  newly elected MP William Congreve Russell. In 1880 it was bought by John Cartland, a wealthy brass founder who transferred it to his four sons who let it on a 21-year lease to Fredrick Everitt, owner of the Kings Heath Brewery in Grange Road.

In 1908 the Cartlands sold the house and half the surrounding land to the Kings Norton and Northfield Urban District Council who responded to popular demand and opened the grounds as a public park. In 1914 the remaining half of the land surrounding the house was to Birmingham Corporation for £5000 and was incorporated into Kings Heath Park.

The house itself was variously used from 1908 as a school, a refugee hostel and a training centre for ex-soldiers going into agriculture. It became a training centre for Birmingham Parks staff and the Birmingham Horticultural Training School was housed here from 1952. To its right is a classic Victorian cast-iron greenhouse with arched iron window frames and elaborate foliage-work in the spandrels. Parts of the park have been used as a television garden since 1972.


The Ordnance Survey map of 1834 shows that only a small number of houses stood along the Alcester Road between Victoria Road and Valentine Road; however, by 1888 housing development had begun around Kings Heath station which had been built in 1840 on the Birmingham to Gloucester line. By 1906 housing had spread as far as Alcester Lanes End and a busy linear shopping street grew up the length of the High Street.

Take a look. At the corner of the High Street and Vicarage Road stands All Saints Church, a good example of an Anglican church built to cater for Birmingham's 19th-century expansion. Designed in perpendicular style by F Preedy the church opened in 1859; the octagonal spire was added seven years later.

J A Chatwin extended the church in 1883 and again in 1899 as the population of the district continued to grow. There is a notable wrought-iron chancel screen erected in 1893 in memory of Mr & Mrs John Cartland.


By 1846 Kings Heath Infant School was in existence in a single room with one mistress teaching 43 children.

From 1870 the school was in union with the National Society for the Education of the Poor in the Principles of the Established Church throughout England and Wales. The society had been set up by the Society for the Promotion of Christian Knowledge SPCK initially to provide education for the poorest children. Its schools known as National Schools were supported from 1833 by government grants. The National Society provided financial help to enlarge the Kings Heath building.

In 1878 the children transferred to Kings Heath Board School, a much larger building on the High Street at Institute Road, which was opened by the Kings Norton School Board. This school closed in 1939 and the children transferred to the new Wheelers Lane Council School. In 1945 this school became Wheelers Lane Boys County Modern School and the 1895 block on the High Street was reopened for juniors and infants. Kings Heath Junior and Infant Schools have since been rebuilt at the corner of Poplar Road and Valentine Road and the High Street building was demolished c1990. The schools amalgamated in 2003.

In 1911 Kings Norton, which included Kings Heath, voted to amalgamate with Birmingham. Residents may have seen their future more closely allied to the growing city than to the rural past; lower rates and better provision of services were certainly an incentive.


By the outbreak of World War 1 private housing was developing at Alcester Lanes End and beyond; and between the wars the farmland of Haunch Farm was built on. The urbanisation of the district was completed with the development of Woodthorpe Farm and Southern Farm during the 1950s.

The line was used as part of a circular commuter route in 1885 to Lifford and back to New Street along the Birmingham West Suburban line BWSR. When the BWSR was made double-track in 1885 this became the Midland Railway’s mainline route from Bristol and Gloucester, the B&G being used only for local services and freight. It is now used only for freight and diverted traffic.

This station closed in 1941 with others on the line as a wartime economy measure but was never to reopen to passengers, although it functioned as a goods station and coal yard until the end of the 1960s. The line itself is still used for goods but all traces of the station are gone.  It is proposed to reopen the station in 2021.

Kings Heath Library was built in 1905 at a cost of £3000. It is a Carnegie library. Andrew was a very wealthy Scottish-American steel magnate and extraordinary philanthropist who put down much of his own success to the fact that he had access to a library. He set up a foundation to make grants to communities under certain conditions: his grant had to be matched and the site had to be provided; an annual 10% of the construction cost had to be provided to run the library and the library service had to be free to all. The first Carnegie library opened in Carnegie’s hometown of Dunfermline, Scotland, in 1883 and by the time the last grant was made in 1919 some 5000 libraries mostly in English-speaking countries across the world.

Images of Kings Heath Library below by Elliott Brown on Flickr reusable under Creative Commons licence Attribution 2.0 Generic (CC BY 2.0) 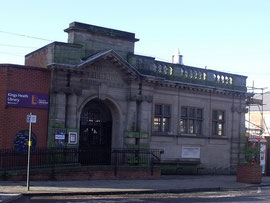 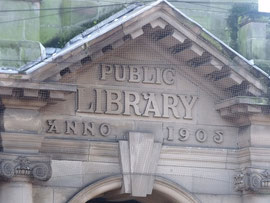 Click to enlarge the images in the Kings Heath Gallery below.