- one of the Domesday manors of Birmingham

Rednal Hill is one of the Lickey Hills and rises between Eachway Lane and Leach Green Lane.

Urban Rednal lies on the northern slopes of the hill and runs northwards towards Longbridge along Lickey Road within the city boundary.


Major housing development here began only after World War 2 with the construction of the Rednal Hill council estate where 600 houses were built.

St Stephen's Church was built to serve the new estate. Dedicated in 1951, it was given its own parish out of Rubery parish six years later. The original building was designed as both church and parish hall.

However, a new church hall was built alongside ten years later. In 1960 volunteers led by the church organist, G A W Jeynes completed the restoration of 450-pipe organ from the closed St John's Methodist Church in Selly Oak.

Cardinal Newman died in 1890 at the age of 89 at the Birmingham Oratory, which he had founded in 1847. He was buried in the small cemetery at the Oratory Retreat on Rednal Hill. Newman was declared Venerable by Pope John Paul II in 1991 and in 2008 his remains were taken from Rednal back to the Oratory. He was canonised as a saint of the the Roman Catholic church in 2019. 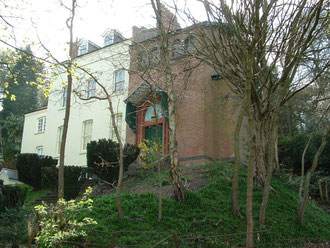 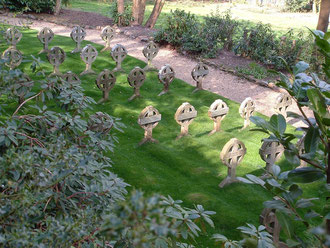 J R R Tolkien 1892-1973 lived in Rednal for a while during his mother's final illness. In the summer of 1904 when Tolkien was 12 years old and living in a run-down inner-city area on the borders of north Edgbaston and Ladywood, Father Francis Xavier Morgan of the Birmingham Oratory arranged for the family to stay in the rural isolation of Rednal.

Fern Cottage, built in the mid-18th-century, stood in the grounds of the Oratory Retreat, just of Lickey Road. It was the local postman's house and the Tolkien's rented two rooms here with meals provided by the postman's wife. Tolkien spent that summer holiday wandering with his younger brother around the Lickey Hills. His mother died that November of diabetes.

Image (right) from Flickr, All Rights Reserved by the owners of Fern Cottage.

An early provision for this small rural community was the Rednal Public Library built in 1909 by Kings Norton & Northfield Urban District Council on Leach Green Lane. The site was donated by Edward Cadbury and George Cadbury Jnr and the building costs met by philanthropist, Andrew Carnegie. The building is no longer a library but residential accommodation.

In 1924 the Bristol Road tram line was extended as far as Rednal terminus giving thousands of city dwellers ready access to the Lickey Hills. The trams were crowded with day trippers on summer weekends and bank holidays.

It is said that the queues for the trams home sometimes stretched back as far as the Rose & Crown.

The trams were replaced by buses in 1953 which continued to use the terminus turning circle and its extensive waiting shelter. This was removed in the 1960s. The tram station office building remains, now a restaurant, and a length of track has been preserved.

Walter Webb (X) on one of Birmingham Corporation’s first motor buses which ran from 1914 along the Bristol Road to Rednal until replaced by trams in 1924. © Walter’s granddaughter, Gaynor Powell ‘All Rights Reserved’ and reproduced with her kind permission.

The Rose & Crown was a coaching inn which stood near the foot of the dangerous Rose Hill descent. Probably built in Georgian times stagecoaches could change horses here ready for the steep climb up the hill. After 1880 a private house was built on the site of the inn and given the same name. The extensive grounds were landscaped with waterfalls and pools along the River Arrow and with a large numbers of trees which still survive. The building is now a hotel.

In 1831 an easier route for coaches avoiding the Lickey Hills was made from Longbridge to Lydiate Ash via the Bristol Road South, New Road Rubery and the Birmingham Road. The coaching inn at Rubery became known as the New Rose & Crown and the one on Rose Hill the Old Rose & Crown. The road was disturnpiked in 1872 when the Worcestershire county authorities took responsibility for the maintenance of highways.

Rednal is one of Birmingham's oldest recorded placenames and is mentioned in a charter of King Offa of Mercia in 780 AD when it was granted with land at Cofton Hackett, Wast Hills and Hopwood to St Peter's Church, Bredon for the use of the Bishop Worcester. In 849 the land was leased back to King Berhtwulf by the then Bishop of Worcester, Ealhun. But in 934 was given St Mary's, Worcester by King Athelstan. The charter of 849 specifies the boundary of the estate by means of landmarks which would have been verified and witnessed by means of a perambulation by a group representing both parties in the contract.


The line of the boundary at the north-west of the estate is not clear. The boundary here certainly runs northwards following the ridge of the Lickey Hills. Here it went sue to Wylheardes Trie ond land thaes Holan Weges (Old English), ‘to Wylheard's Tree along the Hollow-way'; thonne up ofer thaet haeth . . . in tha Rode, ‘then out over the heath (West Heath) . . . to the Long Clearing' (back where the boundary perambulation had begun near the junction of Longbridge Lane and Alvechurch Road; and then on to Headey Heath.)


The area of land at Rednal is described in the charters as being 5 manentes. This unit is also known as a 'hide' and is generally deemed to measure 100-120 acres, c50ha. However it was actually a variable unit used for taxation purposes and is usually reckoned as the amount of arable land needed to feed a peasant family for a year. The actual acreage was therefore variable depending on the nature and quality of the land. 5 manentes would be about the area of modern Rednal, Rednal Hill and Cofton Park combined.

The name of Rednal, Wreodan Hale which is recorded in the 8th-century charter derives from the Old English, wreodan healh, meaning 'thicket nook'. The Lickey Hills were wooded in Anglo-Saxon times as now.

However, ‘nook' is less easy to accurately translate. The word has an implication of self-contained cosiness as it does now. It may have referred to a settlement nestling at the foot of the wooded Rednal Hill.


Along with Kings Norton and other sub-manors of Bromsgrove, Rednal is listed as Weredeshale in the Domesday Book, a berewick of Bromsgrove and belonging to the King. By early modern times it was one of the yields, administrative districts, of the manor of Kings Norton.

Some 2000 years ago, the Roman road from Droitwich cut through the area. It is thought to have run close to the route of Lickey Road and the present Bristol Road South, though a little to the west of it. Archaeological excavations have shown that the road crossed the Lickey Hills at the Rose Hill Gap. (See Lickey.)

In 1963 a Roman coin was found by Janet and Stephen Harris in Dowar Road near Rednal Hill School. This was a dupondius struck during the reign of the Emperor Antoninus Pius who ruled from 138 AD to 161. It was a small coin made of a brass and worth about the price of a loaf of bread.


Evidence of the Stone Age at Rednal includes an arrowhead found on Lickey Road near its junction with Lowhill Lane. Leaf-shaped and made of flint, this artefact dates from Neolithic times and is certainly over 4000 years old . A Bronze Age flint javelin point was found on the surface of disturbed soil by an observant Mr W H Laurie when road-widening was taking place in 1925. This is some 3000 years old.


Rednal was an area of countryside until the middle of the 20th century and there is a remarkable and ancient survival from its rural past. Running along the west side of Lickey Road, between Leach Green Lane and past Edgewood Road, is a medieval hedge whose age is estimated to be over 700 years old.