Standing at the junction of the Lichfield Road with Park Lane and Rocky Lane was the medieval Aston Cross. By the 19th century it had decayed to a mere stump and its remnants were transferred to Aston churchyard in 1854; they are now inside the church.


A clock tower was erected on the site of the preaching cross to replace it. Standing three storeys high the tower was built of brick in the Jacobean style of Aston Hall.

However, by 1891 with the clock notoriously unreliable and the tower unstable, it was demolished and replaced by the present Aston Cross clock. This is set in a square cast-iron tower which is emblazoned with the Aston Board's coat-of-arms and a plaque commemorating the gift of the new clock by Lewis Richards, the chairman of Board.

At the south-east corner of this same road junction had been the medieval pinfold where stray farm animals could be reclaimed on payment of a fine. Both the pinfold and the preaching cross stood not only in a prominent place within the manor of Aston, but on the Lichfield Road, part of a route known from medieval times as 'one of the four great roads of England'; it had linked Bristol with the north-east of England from the Roman period.

But William Hutton, Birmingham's first historian, wrote critically in 1781 of the state of this highway:

One mile from Birmingham, upon the Lichfield Road, sixteen miles, to the disgrace of the community, is yet a river without a bridge.

The river was Aston Brook (also known as Hockley Brook) which marked the boundary between Aston and Birmingham and which was forded near Aston Brook Street (The stream here now runs in an underground culvert ut may be seen canalised alongside the Grand Union Canal before joining the River Tame at Salford Bridge). Aston Brook was finally bridged by Warwickshire County Council in 1792. Soon after 1807 the Lichfield Road was turnpiked and a tollgate barred the road near this junction, which consequently became known as Catchems Corner. Another tollgate stood at Cuckoo Lane. Both were removed in 1862.

No longer seen from the Aston Expressway, the HP Sauce factory was another landmark at Aston Cross. The famous sauce was invented by F G Garton, a Nottingham shopkeeper who first sold it in the late 1800s door-to-door in small bottles. The sauce soon became popular including, allegedly, at No.10 Downing Street, hence the name, which supposedly derives from the Houses of Parliament. The recipe was later given by Garton to Aston vinegar-maker Edwin Samson Moore in repayment of a debt, and by 1905 Samson's Midland Vinegar Company was producing HP Sauce at Aston Cross. The process used water from a depth of over 200m from the company's own well.

During the First World War the sauce was bought by the Ministry of Defence to cheer up the soldiers' monotonous rations of bully beef and it soon became a household name. Moore sold his business in 1924 which then became HP Sauce Limited. In 1986 Samson's original plant was almost completely rebuilt. In 2005 US food giant Heinz bought the company from Danone who had bought the company in 1988. Less than a year later Heinz announced it was to switch production of HP Sauce from Aston to its factory in the Netherlands and production ceased in 2007. The factory was demolished in the summer of 2007.


Adjacent to the sauce factory until 1981 stood Ansells Brewery. In 1857 maltster Joseph Ansell began supplying his product to local public houses most of which at that time brewed their own beer. From 1881 he and his sons began brewing their own beer to supply to pubs. They were quickly and enormously successful. In 1934 Ansells bought out the Holt Brewery and soon became a major national brewery. However, following a serious industrial dispute the brewery closed in 1981 and all operations were transferred to Burton-on-Trent. A group of former Ansells workers subsequently set the Aston Manor Brewery which still thrives in nearby Thimble Mill Lane. Nothing now remains of the old brewery the site of which has been redeveloped for car showrooms.

As urban expansion moved outwards from Birmingham, Aston Cross developed into a local focal point and shopping centre. In 1903 when the Aston Manor Urban District Council was created, this site on the main road from Birmingham into Aston was chosen for Aston Cross Library. The building was a statement of the district's new status. The land was donated by nearby Ansells Brewery and the building paid for by the Scottish philanthropist, Andrew Carnegie.


Adjacent to the library is another good example of Birmingham terracotta, the former Aston Cross Tavern, now O'Reilley's. It opened as a public house and tea gardens in 1775. After the death of the first landlord, a Mr Barron in 1792, his widow kept the licence until her death in 1817.


The pub is mentioned in Showell's Dictionary of Birmingham which was published in 1888:

Of late years it has been a favourite resort of all classes of athletes, though from being so closely built to it has lost much of the attraction which drew our grandfathers to its shady arbours when on country pleasure bent. The park wall extended to the corner of and along the side of Park Lane, opposite the tavern.


The park was that of Aston Hall much of which had been sold by the 1880s and was then being developed for housing. Much of that housing was of poor quality and degenerated into slums by the early 20th century. They area was radically redeveloped during the 1960s.

Reproduced with the kind permission of Keith Berry from his online collection of photographs. All Rights Reserved. See Acknowledgements for a direct link to his website.


Only a short walk from Aston Cross, take a look at Aston Locks. Running along the east side of Aston is Birmingham's second canal, the Birmingham & Fazeley which was opened in 1789. It runs from Farmers Bridge in the City Centre on the Birmingham Canal's Newhall Branch (now Cambrian Wharf) and connects with the Coventry Canal at Fazeley Junction near Tamworth. Its purpose was to give Birmingham manufacturers vital commercial access to London. Only 25 kilometres in length it has 38 locks, including the Old Thirteen in the City Centre and the eleven Aston Locks which lead up to Salford Junction.

Because the locks were built to accommodate only one boat at a time, sidepounds were constructed to allow more efficient use of the lock water. As one boat came up, the full lock could be used to take down another boat waiting in the sidepound.

The flight was soon in use seven days a week, twenty-four hours a day, and by 1841 over 150 boats a day were using the canal sometimes with queues at the locks of twenty boats.

A large number of arms and wharves were built to factories and warehouses nearby including the Bloomsbury Wharf off Plume Street. All are now disused and most have been infilled, but bridges along the towpath still indicate some of their sites. Recent new commercial building, especially at Aston Cross, has taken advantage of the canal as a picturesque feature.


At Salford Junction the original seven-arched aqueduct carries the canal over the River Tame prior to its junction with the Birmingham & Warwick Junction Canal which was built in 1844 to give Birmingham an additional route to the capital. This now marks the start of the Grand Union Canal which was constructed in 1929 as a through route to London largely along existing canals.

Click on the photographs in the Gallery to enlarge them. 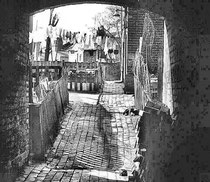 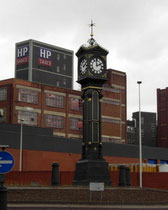 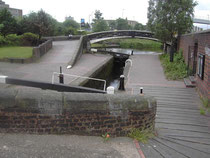 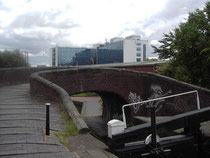 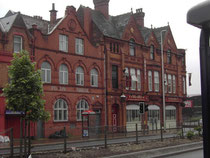 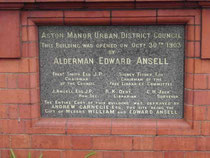