In 1771 Dr John Ash leased from Sir Lister Holte some 10 hectares of land less than a mile from the town centre. Ash (1723-1798) was a wealthy Birmingham surgeon and well-known as one of the founders of the General Hospital. He had a classically styled house built for himself near the junction of Barrack Street and Great Brook Street. But he was never to occupy it, as he had moved to London by 1787. The estate plus a further 20ha was then bought for housing development by the Temple Row attorney and County Coroner, John Brooke who borrowed most of his capital from three wealthy investors. First known as Ashsted or Ashstead, Brooke named the district after the famous doctor to lend kudos to his out-of-town housing development.


The estate was initially aimed at Birmingham's new entrepreneurs. Having made their fortunes in the booming industrial town, they were now keen to move away from its smoky centre into the neighbouring countryside. Ashted was well situated. It overlooked the Vauxhall pleasure gardens at Duddeston Hall where they sloped down into the picturesque Rea valley, and it was advertised for its healthy rural location.

Left: James Drake's Birmingham Street Plan 1825 from the Mapseeker website, reuse permitted for non-commercial purposes. Ashted can be seen in the bottom right-hand corner of the map. It would have been surrounded by fields at this time.

Brooke converted Ash's house into the classically-styled church of St James the Less in 1791; an Anglican church was an essential element of any prestigious estate. The building no longer stands; it was badly damaged by German bombs during World War 2 and demolished in 1956.

Right: The country house of Dr John Ash was converted into a church at the centre of the new estate in 1791. This image from from Beilby, Knott & Beilby 1830 An Historical and Descriptive Sketch of Birmingham, out-of-copyright.

This planned estate was a speculative venture. There had been earlier similar developments: The Square, now the site of Old Square, was laid out as early as 1707, but these estates had all been laid out adjoining the built-up town. The Ashted estate was, at that time, some way beyond the town. Brooke himself seems to have laid out the main roads of the estate and had substantial houses built to let to wealthy middle-class residents. He actively encouraged lessees to sublet their plots or to buy additional land on the estate as an investment.

Plots on the side streets were leased to builders who put up smaller houses to attract tradesmen or the artisan working class. And behind these were back-to-back courts. However, Brooke's project gained him nothing financially. He subsequently lost most his fortune and died in 1801 long before the estate was fully developed.

Images of Great Brook Street 'All Rights Reserved', from the BirminghamLives website used here with the kind permission of Carl Chinn. The houses in the photograph on the left were nicknamed' the doctors' houses' due to their style and size; those in the picture below were the back-to-back courts behind them.

A number of factors led to the loss of status of Ashted. Its location on the eastern side of the town ensured that the prevailing westerly winds brought smoke and pollution from the industrial centre.

And in 1799 the cutting of the Digbeth Branch of the Birmingham & Fazeley Canal and its junction with the Warwick & Birmingham Canal marked the beginning of the end of the estate as a well-to-do retreat. Along the canal an increasing number of arms and wharves served an increasing number of factories and warehouses, the very thing the wealthy Ashted residents had moved to avoid.

Left: The southern portal of Ashted Tunnel on the Digbeth Branch Canal viewed from Belmont Row. One of the six Ashted locks can be seen in the foreground.


While the Warwick & Birmingham Canal marked the western extent of Ashted, the building of the railway of the Grand Junction Railway to Liverpool in 1837 defined its eastern and southern boundary. A local engineering feat, the Vauxhall Viaduct carries the railway over twenty-eight arches across the River Rea into Curzon Street station.

A second viaduct was built on top of it in 1852 to raise the line to the level of New Street Station. A good length of the viaduct was opened to view after the demolition of the Co-op Dairy on Vauxhall Road in 2006, although that site is now occupied by the headquarters of the West Midlands Fire Authority. Stretching across the open countryside of the Rea valley viaduct must have been a dramatic sight from Ashted when it was first built. One hundred and sixty years later, this important monument of the railway age is still very much in use and is protected with a Grade II listing.

Above: This view of the viaduct from Vauxhall Road is no longer visible. The empty site, formerly the Co-operative Dairy, cleared in 2007 now houses the West Midlands Fire Service HQ. By 2030 the HS2 London-Birmingham railway will pass over the empty site here on a viaduct.

By the end of the 19th century Ashted had become a high-density working-class area with a very high proportion of slum dwellings. After World War 1 some of the worst slums in the area were demolished, but it was not until 1937 that a large swathe of Duddeston and Nechells was designated a Redevelopment Area. Work was, of necessity, postponed until after World War 2 when demolition finally began.

A dual carriageway, Nechells Parkway, was cut separating the area into two self-contained neighbourhoods, each with its own centre and amenities and large areas of green open space. The name, Nechells Green was chosen for the Ashted/ Duddeston side.

Housing was now segregated from industry which was to be zoned west of Windsor Street. With lower-density housing only half of the inhabitants could be rehoused here, and most dwellings were in multi-storey blocks. In the late 1990s many of these have been replaced with low-rise housing. The name of Ashted largely fell out of use when the whole area was demolished to make way for the 1960s municipal redevelopment of Nechells Green.

See the Ashcroft Estate for information on Ashted Barracks. 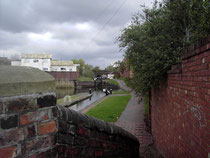 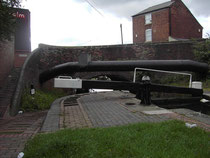 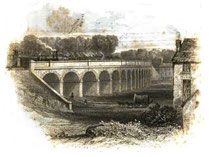 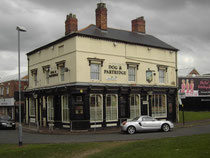