Acocks Green - the place and the placename

The modern district of Acocks Green is named after the Acock family who have long since left the area.

The term green was not originally used for a settlement name but was used to describe an agricultural feature, usually an area of land over which commoners had rights of grazing. Here it was taken as a house name and then used as the name of the nearby tollgate.

With extensive house building in the 19th century the name Acocks Green was applied to the whole urban district, with the modern shopping centre popularly but wrongly believed to be the location of the green.

Until 1956 Acocks Green House stood on the Warwick Road east of the junction with Woodcock Lane, now the site of Bericote Croft. It had been built in open countryside as the English Civil War came to an end, and was the successor of an earlier house raised on the same spot some two hundred years before. That earlier building was the home of the Acock family, one of whom, John Acok is recorded in a document of 1420. It was from the family surname that the name of the nearby green derived.

During the Middle Ages the word green usually referred to common pastureland. This was often situated away from the main settlement on poorer land that was not good enough for growing crops. It was, however, a vital resource where the local peasants could assert certain rights including that of grazing their livestock. The green near the Acock's house was actually further out along the Warwick Road near Woodcock Lane than the present centre of Acocks Green. In medieval times the Shirley Road junction was the site of a tiny hamlet known at that time as Westley Brook after the stream which crosses the Warwick Road west-to-east north of the junction. The stream is now largely culverted except in Westley Vale Park off The Avenue.


In 1726 the Warwick Road was turnpiked and a tollgate was set up at Dolphin Lane near the Dolphin coaching inn. The tollgate was referred to as Acocks Green Gate taking its name from Acocks Green House which stood almost opposite.

In 1852 the station on the Birmingham & Oxford Railway was opened near the hamlet of Westley Brook. The station, whose present buildings date from 1907, was known as Acocks Green & South Yardley from 1878 to 1968 - not the station at those locations, but the place at which to disembark for those places.


(South Yardley, the southernmost point in Yardley manor, was at Yardley Wood some 3 miles away. However, that name has also been relocated and the district now known as South Yardley lies north of Acocks Green Station immediately south of Yardley.)

Right: 25 May 1957 GWR 2-6-2T 4108 at Acocks Green with a local train from Moor Street to Leamington Spa. Thanks to Robert Darlaston for permission to use this ‘All Rights Reserved’ photograph.

The Old Dolphin, Acocks Green, was replaced in 1930 with a new building. This drawing was re-drawn in 1936 from an original sketch made just prior to the demolition of the pub in 1930.

Thanks for the use of this image to E W Green, Historic Buildings in Pen & Ink - The Work of William Albert Green. All Rights Reserved.

Some of the Acock's medieval neighbours were also people of means. There were substantial homesteads in the area that had been set up originally as assarts in the 12th and 13th centuries at a time when the population was expanding. Enterprising local families with some capital would set up home on uncultivated land and enclose fields for their own use. For this they paid what was called a fine, in effect a rent to the lord of the manor, a profitable arrangement for both parties.

Hyron Hall, first recorded as Huyon in 1349, was such an assart and was built with a moat surrounding it. Its 15th-century timber-framed successor survived to witness a Georgian rebuilding alongside it which stood until the late 19th-century. The original moated site is now occupied by Oaklands School in Dolphin Lane and the Hyron Hall is commemorated by a street name.


Acocks Green remained a tiny rural hamlet in the Worcestershire manor of Yardley until the mid-Victorian period. However, when Acocks Green Station opened on the Birmingham & Oxford Railway in 1852, it became possible for better-off residents to commute into Birmingham. And it was at time that housing development began.

Building on Sherbourne Road began from 1857 and included some very handsome houses, some of which survive. Not all were detached properties, but all were substantial. The 1891 Census records 16 houses on Sherbourne Road occupied primarily by employers, people in the metal and gun trades, a merchant, a bank manager and a doctor. All had servants, some more than one, and the doctor could also boast a groom. And Sherbourne Road was just one of such streets in the district.

The photographs of the houses below are from the Acocks Green History Society website and are used in accordance with their terms and conditions. All are substantial houses dating from c1850 to c1885, and a good many examples still remain. 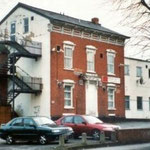 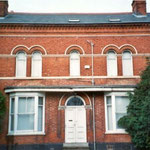 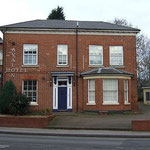 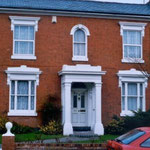 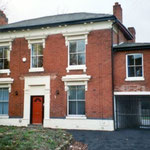 The Church of St Mary the Virgin.

St Mary's Church was built early in the development of the district. The church stands prominently on the Warwick Road and is a large, tall building made of sandstone in a 13th-century gothic style. Designed by J G Bland, it was consecrated in 1866 at a time when new churches in Birmingham were being completed at the rate of more than one every year.

Only twenty years after it had opened the building was enlarged by Birmingham's well-known gothicist, J A Chatwin, although Bland's proposed steeple was never built. In 1940 during the Second World War the building was hit at the crossing by a German bomb which damaged the Burne-Jones east window. The church was restored during the 1950s.


The churchyard here was a much-needed addition to that at Yardley church where all burials in the parish had previously taken place.

By the end of the 19th century Acocks Green was effectively a suburb of Birmingham. However, it was administered by Yardley Rural District Council and Worcestershire County Council who were failing to match municipal facilities to the rapid expansion of the district. In the 30 years after 1881 the population of Yardley rose from some 10 000 to some 60 000. There was no public baths or library, water and gas were supplied by Birmingham and most children attended Birmingham schools. There was not even a refuse collection.

At the beginning of the 20th century measures were taken to address the problem, partly prompted by fears that residents would press to become part of Birmingham where there was better provision and lower rates. In 1902 a new Yardley Council House was opened on the Stratford Road at Sparkhill, a school was built at the centre of the village on the Warwick Road and a police station opened on Yardley Road.

Initiated by moves in Quinton in 1907 to amalgamate with Birmingham, a report by the Local Government Board proposed the establishment of a Greater Birmingham with the annexation of Aston Manor, urban Erdington, Handsworth, Kings Norton & Northfield and Yardley Not all the local councils agreed but a negotiated settlement took place and the bill became law in 1911.

Images below by Elliott Brown on Flickr reusable under Creative Commons licence Attribution 2.0 Generic (CC BY 2.0)

Acocks Green police station on Yardley Road was built in 1909 for Yardley Rural District Council and included a courthouse. It is a handsome building of red terracotta and is still in use. Above the door can be seen three pears, the symbol of Worcestershire. The small fire station was not built until c1921 at the back of the police station; it closed in 1993 when a new fire station opened in Speedwell Road.

The Baptist Church on Yardley Road is a Grade II Listed building. Built in red brick in 1913, it is in Arts & Crafts style. The terracotta church hall on Alexander Road is also Grade II Listed and was built in a free Flemish Gothic style ten years before the church. There are some interesting features included angels and putti. Another hall in an Arts & Crafts style was built in 1924 on the corner of Alexander Road and Yardley Roads filling the gap between the two earlier buildings.

It was not until 1932 that Birmingham opened Acocks Green library. Built in a Georgian style very typical of the period with a prominent Birmingham coat-of arms over the doorway, it stands on Shirley Road.

Built relatively late in the development of the district was Acocks Green School. Opened by Worcestershire County Council in 1909 with accommodation for 1200 children, its striking period style and prominent position at the junction of the Warwick Road with Westley Road make it a notable local landmark.


House building in Acocks Green continued after the First World War and by the outbreak of the Second World War most of the surrounding area had been built up with a mixture of private and council housing.

But what happened to the green of Acocks Green? The original green was on the Warwick Road at Woodcock Lane. This green, which had given the district its name, was built over with housing during the 19th century. However, at the junction of the Warwick Road with Westley Road there used to be a grassed area which was believed by many to be the green. It was in fact the site of the tram terminus which was created in 1932 when the line from the City Centre finally reached the village. With the demise of the trams after the Second War, the site was grassed over and was popularly known by local people as 'The Green'. The roundabout at the centre of the road junction is now grassed and is now, presumably, Acocks Green. And the Acocks? The family had left the area by the end of the 18th century and have not been heard of in the area since.