Old English Mund's or Munda's leah meaning 'Mund's clearing' is found in a document of the 13th century as Mundesley. From the Middle Ages the name Moundsley was the name used of a tax yield, an adminstrative district of Kings Norton.

Off Walkers Heath Road stood Moundsley Hall, a large brick building erected in the 19th century. In 1939 it was decided to demolish the house and replace it with a new Moundsley Hall east of the original site. As demolition proceeded, the timber frame of an earlier building was revealed. Believed to date from c1521, the Tudor mansion had been encased within its Victorian successor.

Below: Moundsley Hall - click on the images to enlarge them.


Below left: Photograph of Moundsley Hall in 1936 before the earlier timbered building was revealed.

Below centre: Conjectural drawing of the earlier building.
Below right: Drawing of the building during demolition during the 1940s.
My thanks for the use of these images to E W Green, Historic Buildings in Pen & Ink - The Work of William Albert Green. 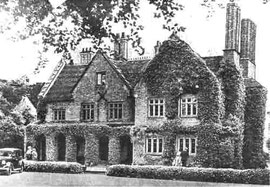 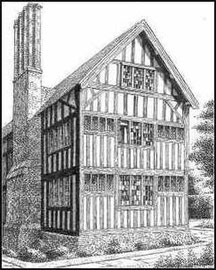 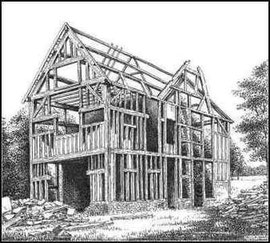 The Field family are known in this area from the 13th century and members of the family at various times owned properties in Kings Norton, in Weatheroak and Kingsuch. It is likely that the timber-framed hall at Moundsley was built for John Field who was granted lands in Kings Norton in 1521. The first mention of the hall is in a deed of 1626.

A pond west of the hall was referred to on early Ordnance Survey maps as a moat. Excavations carried out in the 1940s concluded that the existing pool was probably a fishpond, as no evidence of moated building was found.

In 1770 Moundsley was purchased from Honour, Edward and Frances Field by John Finch, whose sister and heir Jane married John Simpson of Leicester. Her son, John Finch Simpson passed it on to his eldest daughter Mary on her marriage in 1828 to Edward Dawson who, nine years after her death in 1843, sold the property to Thomas Lane, Justice of the Peace and Deputy Lieutenant of Worcestershire. This was a substantial household: the 1861 Census lists Thomas Lane as a magistrate, merchant and dealer and the family have 5 servants including William Nicholls, butler and factotum. Their farm bailiff, George Dawes lived with his family in the Lodge.

Thomas was succeeded by his son, Charles Pelham Lane who was also a JP for Warwickshire and Worcestershire and also High Sheriff of the latter. He died in 1936 and was buried with his parents in the family vault in Kings Norton churchyard. Three years after his death the decision was taken to demolish the old house and rebuild nearby.

It was during the demolition that the true age of the hall was discovered and a full record made. The 19th-century lodge survives on Walkers Heath Road and is a Grade II Listed building, as does the stable block which is now used as office accommodation. A home for elderly known as Moundsley Hall Care Home was subsequently built on the site. In 2009 an archaeological survey was made before a new block was built for the care home. This found evidence of a terraced garden and of a kitchen garden adjacent to the stable block.

A survey carried out in 1998 discovered the remains of a medieval settlement nearby at the junction of Icknield Street, Gay Hill Lane and Walkers Heath Road, presumably the hamlet of Moundsley. This had probably been abandoned in the 14th century at the time of the Black Death when a third of the population of the country perished. Subsequently the area seems to have been turned over to arable cultivation and evidence was found of medieval strip farming.

Moundsley Farm lies about a mile away to the south-east of the old hall site off Crabmill Lane.