Centred on the junction of Mere Green Road and the Lichfield Road, the name refers to common pastureland by a mere, a medieval term for a pool. This was later tautologically known as Mere Pool and lay south-east of the road junction. A small settlement is shown but not named on the 1834 Ordnance Survey map; the placename is recorded in the 1841 Census as Meere Green. Mere Green was considered as part of Hill until the early 20th century. The district rapidly built up and had become part of Sutton Coldfield's urban area by the mid-20th century.

While digging a pond in his garden in Sherifoot Lane, one Mr Young discovered a quantity of broken pottery. When examined by experts the pieces were found to be sherds of 2nd-century pots of the Roman period. Detailed archaeological excavation subsequently revealed a kiln measuring about a metre in diameter and close by was found the potter's rubbish pit which contained a quantity of waste pottery that included broken and misshapen tankards, jars, bowls, dishes, lids, cheese presses and mortars. The light grey pottery made in this kiln was found during the excavations of the Roman villa at Coleshill in 1978. However, the prime market was probably the substantial Roman fort and its associated civilian settlement at Wall on the Watling Street near Lichfield. Large quantities of wood were needed for the firing process and this pottery was clearly making use of the extensive woodland which existed across this part of the Midlands during the Roman period.

On the south side of Mere Green Road, not far from the junction with the Lichfield Road, stands a building bearing a plaque which reads Corporation School erected AD 1826. Now a restaurant, this was the Mere Green Charity School set up for 50 children and built by a local man, Solomon Smith.

He also leased a pair of cottages to the first master and mistress of the school, Mr & Mrs Daniel Aulton. The school and its gardens were built on the site of the Mere Pool, with only a small water-filled pond remaining.

Take a look. Also on Mere Green Road is St James', Hill parish church, the work of two Birmingham architects. The original small church with its west tower was designed by D R Hill in 1834 in a simple gothic style and built in rendered brick. (Hill went on to build St John's at Walmley as well as the Borough Lunatic Asylum and prison at Winson Green.)


St James' was much enlarged about 1906 in red sandstone in Arts & Crafts style by the talented C E Bateman of Castle Bromwich, presumably with the intention of later replacing the rest of the church in the same style. It then had accommodation for nearly 300 worshippers. The two parts of the church don't quite sit comfortably together.

This Grade II Listed church has attractive plaster leaf friezes around the windows and is noted for its elaborate organ surround. 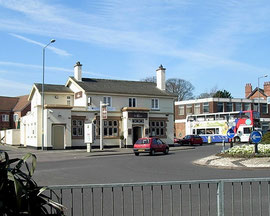 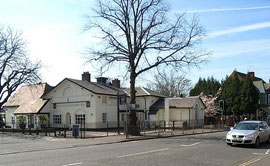 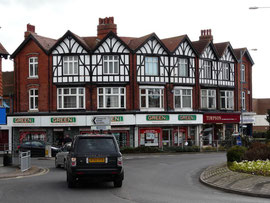