The farmhouse stands on a hill in Meadowsweet Avenue overlooking a little valley to the west. It is a late 15th-century timber-framed farmhouse with early 20th-century brickwork and is a Grade II* Listed building. Excavations here have unearthed pottery from the Middle Ages. The farm was allowed to fall into decay, but has been rescued by a restoration in 2008. It is to form part of a complex of residential supported living for adults with a learning disability.


Primrose Hill Farm was known as The Hole or Hole Farm until the beginning of the last century. This is not uncommon as a farm name and probably derives not from hole but from holm, a medieval term denoting 'flood meadows'. Such land was a valuable asset which provided lush pasture for livestock. 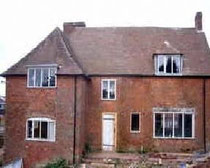 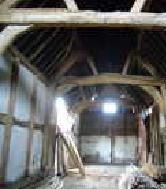 The text below and the photographs above of Primrose Hill Farm are kindly provided by SCJ - Sanderson Carpentry & Joinery of Northfield. See Acknowledgements for a direct link to their website where updated photographs of the work in progress will be displayed.

We are currently refurbishing this 500 year old timber framed house. It is thought to be the 3rd oldest house in Birmingham . The building itself has lain dormant for several years, occupied mainly by the homeless and vandals. After several years of abuse, wear and tear began to set in, and much of the house was in a poor condition. Some of the roof tiles had been smashed and as a result of this the rain got into the building. As it is a timber framed building the water caused considerable damage. Many of the rooms still contain many original features including a handmade Juliet balcony in one of the bedrooms, and an oak floor which is so uneven that it looks like a room of speed bumps.


Primrose Hill Barn stands next to the house; the barn is also in the region of 500 years old. The barn has received much more damage over the years than the house. Mainly from vandals, and some from weathering. Several fires have destroyed the timbers of the north face of the barn, which will need to be painstakingly refurbished. Luckily the barn is made from English oak, so the fires didn't penetrate the main beams as much. Currently the barn is being used by bats and pigeons. Around the site lots of bat boxes will be placed so that the bats still have a place to live once the barn is fully refurbished.

The primrose, primula vulgaris is known as one of the heralds of spring, its name deriving from Latin/ French, prima rosa meaning 'first rose'. Although the primrose is not a member of the rose family, the word was used loosely at that time and certainly its yellow flower is similar in arrangement to that of the wild dog rose. By the late Middle Ages the word was also used figuratively to denote the finest and the best.

Primroses are low-growing wild plants found on banks, hedge and wood margins. They especially thrive in woodland which is subject to a cycle of coppicing. When the trees are cut, primroses flourish in the open conditions. They thrive less well as the trees grow taller, but the increasing shade also suppresses competitors such as tall grasses which allows the primroses to maintain their hold until the next time the trees are coppiced.

However, here the word may refer to another of the primula family, the cowslip, primula veris, a very similar though slightly taller plant which grows in traditional meadows and hedgerows. Its name derives from the Old English cusloppe, meaning 'cow slop' ie. 'cow pat' relating to its prevalence in meadows. The yellow flowers would be a distinctive sight on a hillside in April and May.


Primrose Hill estate was developed in the early 1960s as municipal housing estate along the east side of the Redditch Road south of King Norton Village. The estate was designed with a mixture of traditional housing and high-rise blocks. There is a line of four 11-storey blocks along Shannon Road and others elsewhere on the estate. Built using the large panel system of construction, the blocks are of an unimaginative design typical of their time.

By the end of the 20th century the municipal estates of Hawkesley, Pool Farm and Primrose Hill were suffering from neglect. The housing stock had deteriorated and there were problems of crime and anti-social behaviour. Clearly a single geographical unit, they were designated at the beginning of the 21st century ‘The Three Estates' and a concerted plan of action put in place to improve conditions there.