There seems to be no Birmingham connection with this name: it may have been taken from a streetname in Kensington, London to add some cachet to the pub. The original pub was replaced with a new building of the same name c1990 which itself has since been replaced by a supermarket. The name of the junction is likely to fall out of use as a result.

Left: The Pelham - date unknown - Thanks for the use of this postcard to JKC on the Birmingham History Webring Forum. 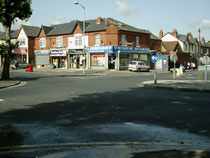