This district of Sutton Coldfield is centred on the junction of Four Oaks Road with Belwell Lane and around Four Oaks Station at the junction of Lichfield Road. Four Oaks Hill is recorded on Beighton's map of Warwickshire in 1725.


This was a rural area until the late 19th century, when Four Oaks station was opened in 1884 on the extension of the Sutton Coldfield Branch line to Lichfield from Birmingham New Street. The opening of the station undoubtedly encouraged house building in the area. But it was not until the second half of the 20th century that the area became part of the Sutton Coldfield urban area and the Birmingham conurbation.


Four Oaks Park or the Four Oaks Estate lies south and west of Four Oaks Road as far as the railway line. Early 20th-century houses here were built on the parkland of Four Oaks Hall from which the district derives its name. It is alleged that three of the original oaks may survive in a garden in Hartopp Road. The 17th-century mansion was built for Lord Ffolliot c1680 on land formerly part of Sutton Park near Luttrell Road.

Ffolliot controversially invoked Henry VIII's Charter of Sutton Coldfield which allowed anyone to enclose waste land to construct a house on Sutton Chase. Set in some 25 hectares the hall was a large country house in neo-classical stucco and stone with an imposing columned pedimented frontage five bays wide. After Ffolliot's death in 1716, his widow lived in the house for another 30 years, selling it to the wealthy Irishman, Simon Luttrell. He had the hall remodelled in Palladian style and enclosed a further 20ha of Sutton Chase for a deer park. Nonetheless Luttrell's residence was a short one and the hall was let to a succession of wealthy tenants after 1766.


By 1792 Edmund Cradock-Hartopp had bought the hall and its estate, in 1827 persuading Sutton Corporation to allow him to enclose yet more of Sutton Park to make his own park a more satisfactory oval shape. The Corporation were more hard-headed on this occasion. They agreed that Hartopp could exchange some 40ha of the land that he owned adjacent to the park near the town for 25ha of the park. He was also obliged to create a new park entrance, the Town Gate, and a new access road, Park Road. The long brick wall near the Hartopp Entrance dates from this time.

Much of the land enclosed by Hartopp was Ladywood, a wood south-west of the junction of Bracebridge Road and Ladywood Road; some still remains within the park. The name of such woods often dates from before the Reformation. They were usually either the property of the Church, or the income from the woodland was dedicated to the Church.

Four Oaks Hall was a substantial country house. On the day of the 1861 Census, 7 April, the Hartopp family were in residence with visitors who included the 18-year-old Marquis Of Hastings of Castle Donington, Gloucestershire and the family of the newly entitled, 7th Earl of Guilford, 9-year-old Dudley North from Maidstone in Kent. They were served by a large number of household servants: a housekeeper, 3 lady's maids, 2 housemaids, 2 laundry maids, a still room maid and a dairy maid, a cook, kitchen maid and scullery maid, a butler, under-butler and valet, a coachman, footman, postillion, groim and stable boy, and the farm bailiff. Lady North had brought her own maid and footman and the Marquis of Hastings had his own valet. The great majority of them were not local but had been drawn from across the country from Scotland London to Somerset and places in between. Also living in Four Oaks Hall Garden Cottage nearby were three gardeners.


The set-up at the hall is interesting when compared with the residents of Four Oaks Hall Cottage, a house more than likely rented from the Hartopps. Here there lived the family of Mary Beck, an 82-year-old agricultural labourer from Erdington with two daughters in their 40s, whose occupation was sewing. One of them had a son of 11 years.

By the late 1800s, the days of large country houses, even in Sutton Coldfield, were coming to an end. Sir John Cradock-Hartopp, the 4th baronet moved to a large house in Kingswood, Surrey with his family and was living there attended by twelve servants. The Four Oaks estate was bought by the Four Oaks Racecourse Company who laid out a course for horse racing in 1881. The course followed the perimeter of the hall's park with the grandstand along the present site of Clarry Drive. however, it was not a successful business venture and folded less than ten years later. Much shrewder was the Marquess of Clanricarde, a wealthy Irish MP who bought the estate for superior housing development. Building began in the last years of the 19th century and continued for 20 years. The hall fell into disrepair and was demolished in 1898, its site was that of the present Carhampton House, one of three Grade II Listed buildings in Luttrell Road.


A large part of the Four Oaks Estate is now a conservation area with some very fine houses. These include Redlands in Hartopp Road designed by C E Bateman in Tudor style c1900, Woodgate by W H Bidlake also in Tudor style, and Bateman's Swanston and Bryn Teg both in Queen Anne style in Bracebridge Road. All are Grade II Listed buildings

All Saints was designed by E R Reynolds and consecrated in 1908 by Charles Gore, the Bishop of Birmingham. The church was enparished in 1920. The church is built of brick to a simple design with a single nave aisle, but was never completed to the original plan - a tower was intended. A choir vestry was added in 1954, and a substantial extension was built in 1965 , with a new chancel and a priests’ vestry reminiscent of a medieval chapter house.

There are examples of windows from the 1950s in the choir vestry, and during the 1980s and 1990s a number of windows of the saints were commissioned from the artist Osmund Caine, representing the largest single collection of his work in glass.

In the late 1990s a large painted hanging rood was installed over the chancel steps paid for from the estate of former churchwarden, Carl Watkinson, a teacher at Bishop Vesey Grammar School. John Poole, a sculptor in wood, metal and stone was commissioned to do the work in 1992 and dedicated by the Bishop of Birmingham, Mark Santer in 1998.

South of the junction of the Lichfield Road and Four Oaks Road is a location known as Doe Bank, a name first documented in 1821. There was a small hamlet here by 1834, but the name is no longer in use. 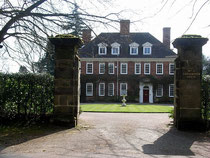 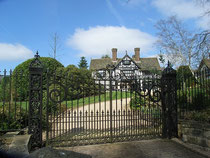 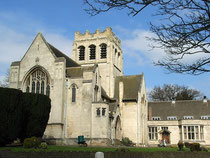