From the 16th century some of Birmingham's many watermills were converted from corn grinding to industrial processes, not only in the town but also in the rural hinterland. By the 17th century many mills were used for sharpening agricultural blades and swords as this required little water and could be done on Birmingham's small streams.


During the Civil War Porter's Mill in Digbeth had single-handedly supplied fifteen thousand swords to the Parliamentary forces, with other mills adding to the number.


Situated some twenty miles from a navigable river and built on a plateau, Birmingham is poorly placed for transport. However, the development of turnpikes and canals greatly improved the town's ability to import raw materials and to export manufactured goods. By specialising in small products using a high degree of skill, enterprising manufacturers successfully branched out into producing a variety of small products, including swords and guns. Many local watermills were now turned to grinding or polishing gun barrels.

At the beginning of the 18th century there was a small concentration of gun makers in the industrial area of Digbeth. During the century, however, the trade gradually moved to the north-west fringe of the town largely on the Weaman estate around Whittall Street in the district now known as the Gun Quarter. This was conveniently situated near Kettle's Steelhouses in Steelhouse Lane and close to the Birmingham & Fazeley Canal. Sketchley's 1767 Directory of Birmingham lists 62 separate workshops involved in gunmaking.


In 1689 the Government entered into discussions with local gun makers and, after a trial order, in 1692 placed a contract with five manufacturers to supply 200 muskets per month for one year. This was the beginning of a massive expansion. During the war against the French from the 1690s until the Treaty of Utrecht in 1713, the industry was able to supply some forty thousand guns to the British government. By 1750 gunmakers Farmer & Galton were exporting to Africa alone twelve thousand guns a year.


Gun making was a very fragmented industry. The manufacture of the many parts of a gun was sub-contracted out to small independent workshops which specialised in specific aspects. Most gun barrels were not made in the Gun Quarter but brought in from Aston, Deritend, Smethwick and West Bromwich, and the locks were often made in the Black Country. Other parts were manufactured within the quarter, and the guns were generally, though not always, assembled here. In the late 19th century, Showell's Dictionary listed more than fifty specialist trades involved in gun manufacture.


During the Napoleonic wars 1803-1815 production reached unprecedented levels with over three million guns being made, and Birmingham's gunmakers supplying two thirds of the guns used by the British army.

The Bull in Price Street dates from the 18th century, though the building has been extended and altered since. It is one of the small number of original buildings remaining in the Gun Quarter. During the 19th century it was usual for the gun workers' to be paid their wages here.

Most gunsmiths set high standards of workmanship. Private proofhouses existed in Birmingham on gunmakers' own premises and were available for use by others, but because proofing was not compulsory at that time, they were not used by less reputable manufacturers. Many saw the need for independent proof as was the case in London. As a result the Birmingham Proof House was set up by Act of Parliament in 1813 due to the lobbying of and at the expense of the Birmingham gun trade.


The Proof House, which is still very much in use, is not situated in the Gun Quarter but in Banbury Street, Digbeth. It still performs its original function and has a museum on site which may be visited by arrangement. It is a Grade II Listed building. There is a notable relief display of heraldry over three metres wide above the front entrance by William Hollins, which includes the Hanoverian coat-of-arms, the Birmingham shield with crossed swords, proof mark and a profusion of muskets, pistols, cannon balls, flags and drums. The present Jacobean-style gateway dates from 1883.

Below: The Birmingham Proof House, Banbury Street, images by Oosoom on Wikipedia available for reuse under the GNU Free Documentation License. 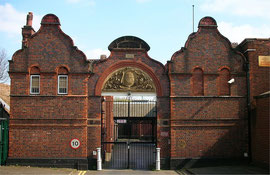 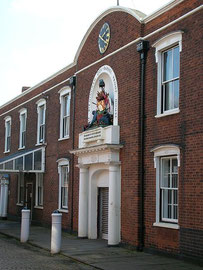 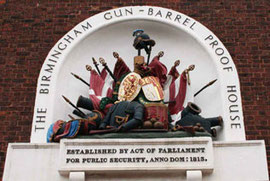 By 1815 there were 125 firms involved in gun making mostly in the Gun Quarter, by 1829 there were 455 and by 1868 there were 578 gun firms in Birmingham. The Crimean War 1854-1856 was another boom time for Birmingham gun makers; in the decade from 1854 over four million barrels passed through the Proof House.


In 1862 sixteen separate gun firms amalgamated to form the Birmingham Small Arms Company, BSA, with a large mechanised steam-powered factory at Armoury Road in Small Heath which took work away from the town centre. However, many small manufacturers remained in the Gun Quarter until the major rebuilding and road developments of the 1960s spilt the area in two. Birmingham's gun trade still exists as a small specialised industry, though only just in evidence in what remains of the old Gun Quarter.

The Gun Quarter was all but destroyed during the 1960s with the building of the Inner Ring Road which passed through the middle of it. The only remaining part of any integrity now lies north of St Chad Queensway, with the few remaining old buildings now restored and well maintained.

The firm of Westley Richards was established in Birmingham in 1812. They too had to move with the building of the Inner Ring Road and in 2008 moved nearby to a an old building in Pritchett Street which they completely refurbished as a bespoke high-quality gun manufactory.

The district had a high proportion of Roman Catholics hence the founding of St Chad's Church here, the precursor of the present Catholic cathedral. The Catholic school founded in Shadwell Street regularly had problems with boys' attendance because they were recruited at a young age to work in the gun trade.

St Chad's Cathedral, a Grade II Listed building on St Chad's Queensway was the first Roman Catholic cathedral to be built in England after the Reformation. It replaced a smaller St Chad's Church in nearby Shadwell Street, a Georgian neo-classical building which had been designed by William Hollins in 1808. The new church was the brainchild of Bishop Walsh and was in the middle of the densely packed Gun Quarter (now largely gone). A branch from the Birmingham & Fazeley Canal, now infilled, brought materials to the site.


It was designed in 1841 by A W N Pugin, a prime mover in the Gothic Revival, and gave him an important opportunity to put into practice his beliefs about architecture and Christianity. The church is in red brick with steep roofs of Welsh slate and two slender spired towers in 14th-century Baltic German style and unlike any other Birmingham church. The octagonal north-west chapel dedicated to St Edward is by Pugin's grandson, Sebastian Pugin Powell and was added in 1933 as a memorial to Archbishop Edward Ilsley, the first Roman Catholic Archbishop of Birmingham. In the tympanum above the main entrance is a stone medieval-style Virgin & Child flanked by angels by Pugin; also on the west front are life-size statues of bishop-saints associated with the English Christianity: Saints Augustine, Chad, Swithin, Wulstan, Thomas and Hugh wearing bishop's clothes. The south-west spire was added by Pugin's eldest son, Edward Welby, in 1856 in memory of Canon John Moore 1841-1848.


The church officially became the Cathedral in 1850 when Pope Pius IX restored the Catholic hierarchy of England and Wales. Cardinal Newman was the preacher at Bishop Ullathorne's enthronement as the first Bishop of Birmingham.


The stained glass windows were made locally by Hardman's from Pugin's designs, those on the north wall show the making of the windows and include John Hardman himself; windows in the Chapel of St Edward tell how the relics of St Chad came to be in the cathedral. The window in the Lady Chapel is known as the Ha'penny Window, paid for by contributions from children of St Chad's School Shadwell Street. St Chad's thigh-bone is placed in the St Edward Chapel; his other relics in a gilded casket above the high altar.


The pulpit is of the early 1500s from Louvain Abbey and there were 15th-century German statues in Pugin's rood screen; the screen was removed after the Second Vatican Council 1965 emphasised congregational participation in the Mass. The bishop's throne incorporates 15th-century German carving from the Church of St Maria in Capitolio, Cologne; statue of the Virgin and Child in the Lady Chapel is also 15th-century German; in the north-west chapel painting attributed to Albrecht Durer c1500. The Stations of the Cross were designed by Albrecht de Vriendt 1875. An effigy lies on top of Bishop Walsh's tomb d.1849 designed by Pugin in north transept; over the tomb is an ornate ogee arch in decorated gothic flanked by pinnacles. A fibreglass statue of St Joseph by Michael Clark was put in place 1968 after the cathedral was extensively renovated. There are some burials in the crypt.


In 1941 on its centenary Pope Pius XII made the Cathedral a minor basilica. Such a church has a special realtionship with the Pope and is entitled to display the papal coat-of-arms over the main entrance. In November 1940 a German bomb hit the Cathedral roof and exploded when it hit the central heating pipes. The water from the burst pipes extinguished the bomb and saved the Cathedral from almost certain destruction.

Click to enlarge the images in the Gun Quarter Gallery. 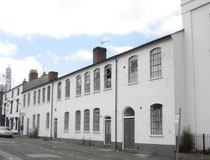 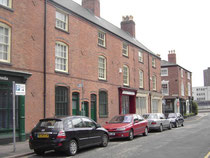 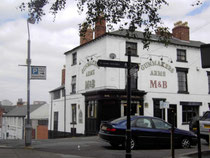