This was not Camp Hill but Kempe Hill and derived from a family name. The holder of the land in 1330 is now commemorated by John Kempe Way, a road on a late 20th-century retail park near the junction of Camp Hill Middleway and Bordesley Middleway.


Camp Hill was probably renamed by association with Prince Rupert's camp here in 1643 during the Civil War. Many Birmingham people supported Parliament and local blade mills made arms by the thousand for the parliamentary forces. Robert Porter alone supplied fifteen thousand swords from his Town Mill in Digbeth to the parliamentary commander, Lord Essex, but none were sold to the King.


The effect of the war on Birmingham and its surrounding area was sporadic but no less terrible for that. On Easter Day, 3 April 1643 Prince Rupert travelled with 12 000 horse and 700 foot soldiers from the King's headquarters at Oxford en route to retake Lichfield. He came towards Birmingham along the Stratford Road and arrived at Kempes Hill.

Despite guarantees of good behaviour the Prince's envoys were refused billets in the town for his officers and troops. Rupert himself made a temporary headquarters at the Old Ship Inn which stood south of Holy Trinity Church. Meanwhile the Royalist troops set up camp close by overlooking the town. Birmingham had no defences and a force of only 200 parliamentary troops under the command of Captain Thomas Grevis of Moseley Hall. Barricades were quickly raised across the narrow holloway of Bordesley High Street.

At 3 o'clock that afternoon Rupert's dragoons attacked twice only to be repulsed on each occasion. However, led by Basil Feilding, the Earl of Denbigh, they skirted the defences by riding to the west across the fields at the back of the houses. After fording the River Rea, they smashed through the last small barricade at Mill Lane. Digbeth and the town lay open to them.

Grevis' men regrouped in the Bull Ring, and then retreated up New Street to Summer Row and along the Dudley Road to Shireland Road, the royalists in hot pursuit. At Cape Hill the parliamentary troop suddenly turned on the royalists and in the fray Denbigh was mortally wounded, allegedly from a musket ball fired by Grevis himself. The royalist troop was routed.


In revenge Rupert ordered Birmingham to be plundered and burned. A blaze was started at No.12 Bull Street and that night, by the light of the flames, the town was looted. By morning some eighty houses, about one tenth of the town, lay in ashes and some 400 people were homeless. A complete destruction of the town was averted only by a fortuitous change in the wind direction.


The next day, before moving on to Lichfield, the royalists pulled down Porter's blade mill. Birmingham casualties, however, were relatively slight; fourteen townsfolk killed and some of these were actually royalist sympathisers. Casualties among the royalist troops seem to have been heavier; some thirty dead, two cartloads of whom were carried away. The King's reputation was as damaged by this attack on civilians as that of Parliament was boosted. The Battle of Birmingham was represented as a tiny force of poorly-armed townsfolk bravely withstanding overwhelming odds.


A remarkable survival here is Camp Hill Farm, now known as Stratford House because of its proximity to the Stratford Road. Built in 1601 this is a substantial yeoman farmer's house in typical Warwickshire style. Built by Ambrose and Bridget Rotton whose initials are carved over the door, it is similar in design to Blakesley Hall, Bridget's birthplace in Yardley. This was a relatively late timber-framed house, where the quantity of wood used in its construction and ornament was a conscious display of wealth and status.


The house was owned by the Rotton family until 1696 and then by the Simcoxes until 1926. From 1838 the Birmingham & Gloucester Railway was built on the adjoining farmland; then in the 1880s the Simcoxes sold the remainder of their land for housing.

Between 1854 and 1915 the house accommodated the Misses Grimleys' ladies' boarding school; the old school bell remains visible at the rear. The house was bought by the London, Midland & Scottish Railway Company in 1926 with the intention of demolishing it to expand their extensive Camp Hill Goods Yard. However, by 1930 the railway, probably due to public pressure, had repaired the house for use as offices. After the Second World War the house again fell into serious disrepair but was saved and restored by one Ivon Adams in 1954 and is now rented out as offices. Stratford House is scheduled as an Ancient Monument and is a Grade II* Listed building.


Consecrated in 1823 this is a Commissioners' church designed by Francis Goodwin in perpendicular style after the chapel of Kings College Cambridge. It has pinnacled side buttresses and octagonal turrets; an ornate west-end rose window of cast-iron above a deeply recessed porch with ribbed vaulting. Inside are galleries on three sides supported on cast iron columns. The cast-iron pulpit is designed to look like wood, and the altarpiece by James & George Foggo is a copy of Murillo's 'Christ at the Pool of Bethesda'. There is good stained glass made by Gerente in 1855.


This is an important Birmingham church building. St George's (now demolished) on Great Hampton Row was the first church of the gothic revival to be built in Birmingham in 1822. Holy Trinity was the second and thus the oldest surviving gothic revival church in the city. As it later turned out the style of gothic much preferred during the 19th century was the 14th-century decorated style rather than the later perpendicular. An important survival from this date of the type, the building is Grade II Listed.

Holy Trinity was also important in reflecting the High Church movement of the Anglican Church. The first vicar was succeeded by Rev Dr Joseph Oldknow who was Birmingham's first ritualist priest; he in turn was succeeded by Rev R W Enraght in 1874 who was imprisoned 1880 for his high-church practices. Oldknow is buried here; Latin on the gravestones gives a clue to the church's Anglo-Catholic history. The burial ground was closed in 1873 although family graves continued to be used until 1925. Some remains were removed due to the widening of Sandy Lane/ Bordesley Middleway; and many gravestones were removed when the church was deconsecrated in the 1970s. The building was used as a hostel for homeless people until c1999. 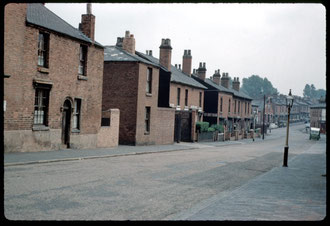 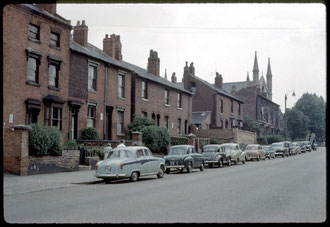 King Edward VI Elementary School was set up in Meriden Street Digbeth as one of four new schools by the King Edward VI foundation. In 1881 children from this school became the first pupils at the new King Edward VI Grammar School, Camp Hill on the Stratford Road. Separate boys' and girls' departments were housed in a fine red-brick and terracotta gothic building which still stands.


The grammar school transferred to new buildings on the Cartland Priory estate in Kings Heath in 1945 and the old school became Bordesley College of Education catering mainly for mature female entrants to the teaching profession. In the early 1980s It was Bordesley Teachers' Centre and in the 1990s became an Islamic education centre founded by the Yemeni community. This Listed building was extensively restored in 2004.