Originally simply Bromwich from Old English brom wic meaning 'broom farm', the manor is mistakenly included in the Northamptonshire entries of the Domesday survey where it appears as Bramewice. (Neighbouring Water Orton is also recorded here.) Castle was later added to the name probably to distinguish it from Little Bromwich.

Left: Castle Bromwich Bridge 1924 (west side), a crossing place of the River Tame since prehistoric times. Thanks for this image to E W Green, Historic Buildings in Pen & Ink - The Work of William Albert Green. See Acknowledgements for a direct link to the site.

There is land for 3 ploughteams.

In the demesne [the lord's land] 1 ploughteam. 10 villeins [freeborn tenants] and 3 bordars [smallholders] have 3 ploughteams.

Woodland 1 league [1.5 miles] long and half a league wide.

The value [for tax purposes] was and is 40 shillings. Brictwin [the former Anglo-Saxon lord] held it [in the time of Edward the Confessor].

Broom is a shrub typical of glacial drift and would indicate to travellers a firm river crossing, here an important ancient ford across the River Tame. (See also nearby Bromford.) This is part of a prehistoric route running from south-east to north-west. During the Roman period it was part of a route which led to Coleshill where a 1st-century villa and temple have been excavated.

This old route, now the Chester Road, derives its name from the Broughton-Chester-Stonebridge Turnpike Trust which was set up in 1759. It became part of a nationally important route running past, though not through Birmingham, and linking London via Coventry and Stonebridge to the major seaport of Chester.

The road ran northwards via the present A452 before joining Watling Street (the present A5) at Brownhills. It must have been less well-used after 1727, when the Coventry Road and Soho Road/ Holyhead Road via Birmingham became part of the London-Holyhead Mail Road to Ireland.


The first evidence of any stage-coach route in the Midlands is the London-Chester line which commenced via Castle Bromwich in 1659. This operated until the 1830s with only a single year's gap, and that during the Great Plague of 1665. However, with the opening of the railway lines to Liverpool and to London in 1837 and 1838 respectively its fate was sealed fairly abruptly.


Castle Bromwich was a manor in the ancient parish of Aston and covered a much greater area than it does now. It stretched between the Rivers Tame and Cole from Bromford Lane in the west as far as Kingshurst and Water Orton in the east. The Anglo-Saxon village probably straddled the Chester Road east of the hall as it still does and there is some evidence of a medieval village along Mill Hill, now a dead-end section of the Chester Road past Castle Bromwich church. Wich has the implication of 'dairy farm'; this was probably a secondary settlement set up by the lord at Aston to take advantage of the fertile water meadows on the floodplain of the River Tame.


During the 19th century a number of large houses had been built in the area, but the district remained rural until after World War 2 when large-scale private development began. In 1931 the west part of Castle Bromwich amalgamated with Birmingham to become Hodge Hill and Shard End. The remainder remained part of Warwickshire until local government reorganisation in 1974 when it became part of Solihull. The district now lies west of Newport Road, and north of Bradford Road as far east as Windward Way, Smiths Wood. The church, hall and village along the Chester Road form a conservation area with a number of listed buildings including the timber-framed former post office and Wayside/ Delamere, known as the Bridgeman Arms in the 18th century. 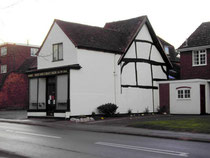 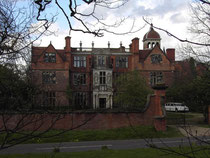 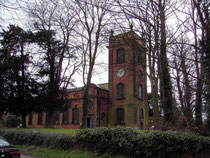 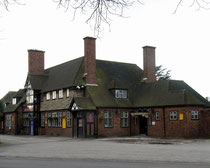 Take a look at Pimple Hill.


Between Junction 5 of the M6 and the Chelmsley Collector Road on a small but prominent semi-artificial mound stand the Norman earthworks of Castle Bromwich Castle. The hill is almost inaccessible and probably best viewed from Castle Bromwich graveyard on the old Chester Road opposite the church.


Here is a unique Birmingham site with evidence not only of the Normans but also of the Stone Age, the Bronze Age and of the Romans. The early 12th-century motte-and-bailey castle was built, possibly on an existing defended site, to guard the important crossing of the River Tame. It would have been built on the orders of Ansculf de Picquigny or of his son, William FitzAnsculf, lords of Dudley and carried out by the lord of Castle Bromwich manor, possibly Ralph who was lord in 1086.


The motte was topped by a square wooden castle perhaps three storeys high with a palisaded lower bailey between the motte and the church. The castle was probably more of a watchtower than a house, and it is likely that the lord of the manor had a separate residence nearby. The fortified wooden castle was never rebuilt in stone and is unlikely to have lasted long. Once stability was established and the local population subject to Norman rule, the lords of Dudley would not have wanted another castle as a potential power base in one of their own manors.


How the manor descended after the Norman Conquest is not known, The names of Wido de Bramewic and Alan de Bromwych are mentioned in documents of 1168 and 1185 respectively, Henry de Chastel de Bromwych in 1287. That same year Anselm, son of Robert de Brumwyk inherited the lands of his sister Juliana. The manorial family had taken as their surname the name of the manor, and may well be descendants of the Ralph recorded at Domesday. In 1291 Anselm is described as being of 'Wodebromych' ie. Woody Bromwich. He was succeeded in 1345 by his granddaughter Isabel and her husband, William de Peto, a Warwickshire wool collector.

The manor descended through the Devereux family until 1657 when a later Anne Devereux sold it to John Bridgeman. Some property here remained in the family, however, until 1712 when George Devereux, a bankrupt London draper sold his remaining lands. The Bridgemans hold the manor to the present day.

Well worth a visit

The Bridgemans were created the Barons Bradford in 1792 and the Earls of Bradford in 1815. The sixth earl is the current lord of the manor. The arms in the present church bear the Red Hand of Ulster indicating the purchase of the baronetcy from James I in 1611.


Sir John Bridgeman II set out to enlarge and remodel the 16th century hall in classical style and had the gardens laid out to match. The gardens were laid out in the contemporary formal arrangement of self-contained areas separated by walls or hedges or changes of level. Not only did the gardens survive the 18th-century landscaping fashion, which saw the removal of formal gardens throughout the country, but also the 20th-century expansion of Birmingham.

Although derelict and overgrown, the lay-out of this walled garden was largely intact when the Castle Bromwich Hall Gardens Trust was set up in 1985 to restore it. The gardens are Listed Grade II* on the Register of Parks and Gardens and are open to the public during the summer season. The Grade I Listed hall is now open as a hotel and welcomes visitors.

Well worth a visit


The importance to this church of the succession of lords of the manor is that, until 1878 this was not a parish church, but the private chapel of the manorial lords. It is likely that the original Norman chapel was built for one of the de Bromwich family. The church first appears in documentary evidence of 1165, in a charter recording the granting of Castle Bromwich by the manorial overlords, the de Paynel family to Tickford Priory.

Another document of 1175 mentions a Norman chapel dedicated to the Blessed Virgin Mary at Castle Bromwich. Wido de Bramewic is recorded as lord of the manor in 1168, and Alan de Bromwych in 1185. There is a further reference in a document by William of Berwood in 1301 where, as part of a land transfer, the recipient is required to

'sustain annually a wax light and torch burning before the altar of the Blessed Virgin in the Chapel of Wodybromwig all the year when other wax lights and torches are lighted in the said Chapel.'


The chapel was extended probably by a Devereux during the 1400s and then rebuilt 1726-1731 by Sir John Bridgeman II. The present Lord Bradford is still the patron of the living.


Built in local sandstone perhaps in the mid-12th century, the chapel would have been roughly the size of the present chancel. Evidence of the original stonework still survives. Outside the church the 18th-century building at ground level has a run of decorative sandstone above a brick foundation. At the east end, however, there is no brick - the foundations of the chancel are made entirely of stone. These are very likely to be the original Norman foundations. And inside the church in the north wall of the chancel where an aumbry was built in the 18th century, a wall of sandstone blocks can be seen behind the Georgian oak panelling. Beighton's drawing shows the chancel to have been made entirely of stone.

The church was greatly extended during the early 15th century as a large timber-framed building. The trees used were of great dimensions; the posts holding up the roof are some 23 feet tall and 20 inches square. They must have been some hundreds of years old when they were felled. Carpenters' marks on the east side of the roof timbers suggest that the framework was laid out on the ground facing away from the chancel and then raised up to meet it.


The posts stand on stone bases and the floor appears to have been paved with stone. Inside the church the timber would have been as visible as on the outside; there would have been no ceiling and the roof beams were visible from the floor.

The church door may have been at the west end roughly where the font is now, with a door near the altar in the south wall of the chancel for the priest to enter.


By 1731 it had been rebuilt in brick as a neo-classical church, and as such is a rare survival in Birmingham. Even more unusual is that the new church was built around the medieval timber-frame which is still in place. The massive oak roof, over five centuries old, can still be seen today. It is believed to be the only example in the country of a timber-framed church encased in brick and has Grade 1 Listing.

In School Lane, this was the schoolhouse of Castle Bromwich church school which served a small rural community. It was replaced in the 19th century by a school on the Green, now demolished, and in the 20th century by the present St Mary & St Margaret's School in Hall Road.

Authorised in 1836 the Birmingham-Derby line opened in 1839 with its terminus at Curzon Street Station. The line originally ran via Hampton-in-Arden on the London line, but due to high tolls and traffic delays the company built their own line along the Tame and Rea valleys to a new Derby Station in Lawley Street in 1842. Also known as the Tame Valley Railway, this and the Birmingham-Gloucester line became part of the Midland Railway in 1846. Castle Bromwich Station opened in 1841.

The British Industries Fair BIF exhibition centre 1920 stood alongside the railway north-west of the station; in 1933 for the BIF annual fair the first diesel train in the country arrived on its maiden run from Euston. The station closed in 1968.