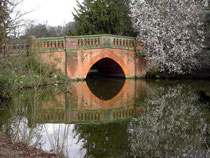 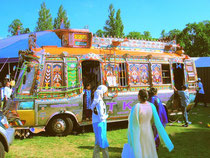 An attempt to map the routes of the armies during the Civil War produces a tangled web. And many of the guerrilla movements and local raids by armed bands are simply not known. Yet every one-night-stand left an indelible mark on the local people. Cannon Hill is believed to take its name from the day that Royalist troops camped here on their way to the Battle of Naseby in June 1645. This name is applied only to Cannon Hill Park and perhaps its immediate area.

Well worth a visit. Birmingham's premier formal park was laid out in 1873 on land known as Cannon Hill Fields, part of the Moseley estate of the heiress Louisa Ann Ryland. The land and the work were paid for by her and given to Birmingham town council on condition that the park should not be named after her.

Later extensions to the park were given by Sir John Holder of Moor Green and by Lord Calthorpe of Edgbaston. Louisa Ryland's Cannon Hill House, built c1830, stands near the Russell Road entrance to the park and is now used by the National Centre for Conductive Education.

The park was maintained in formal Victorian style (as much of it still is) until connected southwards c1985 with the Rea Valley Walkway to Northfield. This end of the park was then developed with conservation in mind and a wild-flower meadow was sown near the Pebble Mill entrance.

In 1989 children from Heath Mount School in Balsall Heath with other local schools planted a variety of native trees with David Bellamy in the Centenary Woodland plantation at the rear of Holders Lane to mark the centenaries of both the Royal Society for the Protection of Birds RSPB and of the City's charter.

Cannon Hill Park forms the northern end of the Rea Valley walkway, a green urban corridor along the river from Northfield.

The park has for many years been used as the venue for a wide variety of celebrations - the Tulip festival, the Highland Gathering, the Lord Mayor's Show, Eid Mela, A Taste of Birmingham and various sporting events.

Take a look at The Golden Lion.

Image right: The Golden Lion Inn, originally stood in Deritend; it was re-erected in Cannon Hill Park in 1910 - drawn 1939. Grateful thanks and acknowledgements for the use of this image to E W Green Historic Buildings in Pen & Ink - The Work of William Albert Green. S


An unusual feature of Cannon Hill is the Golden Lion, an early 16th-century timber-framed house which stood originally in Digbeth High Street. It is typical of many in that area until the 19th century. Saved from destruction for road-widening this Grade I Listed building was re-erected here in 1911. The building is curretly in a very poor state.

Cannon Hill Park also boasts a good Victorian bandstand. Dating from c1880 it is of cast-iron, octagonal in shape and is Grade II Listed.


There are two war memorials in the park. The South African War Memorial is by Albert Toft and commemorates the dead of the South African campaign 1899-1902. It was erected at the instigation of The Birmingham Mail, paid for by public subscription and unveiled on 23 January 1906. On Queens Drive on the other side of the River Rea is the Scouts Memorial which was unveiled in 1924 by the Duke of York (later King George VI) in memory of scouts who died in the First World War.


A model of the Elan Valley reservoirs was made in Cannon Hill Park not far from the main entrance to the park in Edgbaston Road. The scheme had begun in 1874 to bring water from Wales to supply Birmingham's soaring demand. By 1961 a fourth pipeline was completed which is commemorated by the model. 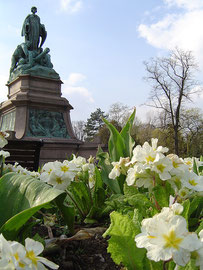 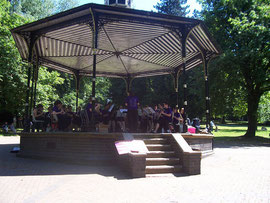