Originally part of the demesne belonging to the lord of the manor, the lands here were farmed at the time of the 16th-century manorial surveys by Richard Russell, a member of a wealthy Birmingham family. The fields lay between Holloway Head and Bell Barn Road. See also Colborne Fields.


Lee Bank was named from Lee Crescent after early 1960s slum clearance and redevelopment. This street had been in turn named from an 18th-century landowner here, the attorney Thomas Lee.

The land belonged to the Colmore family and was developed as Bell Barn Estate, named after Bell Barn Road, the southern limit of development by 1792.

The curve of the road in contrast to the grid pattern of the other streets suggests that it may predate the estate having developed as a boundary lane around Colborne Fields.

The houses here were convenient for the town but at that time some distance beyond the urban area. During the late 19th and the early years of the 20th century the area had a very high proportion of back-to-back terraces and slum dwellings.


After the Second World War the 'Blitz & Blight' Act of 1944 permitted the compulsory purchase and redevelopment of both bombed and slum areas and enabled four new towns to be designated, one of which was Lee Bank. From the late-1950s clearance was almost total. The district was rebuilt with a variety of housing styles including terraces, maisonettes and tower blocks. Although considerable effort had been put in to the overall design of the estate, the design of the individual buildings, especially the tower blocks, left much to be desired.

From the 1960s the estate again began to fall into disrepair and to suffer from serious social problems. The whole area between Bristol Street and Lee Bank Middleway is once again being totally redeveloped from 1999 around a central park, and is now known as Attwood Green, after Birmingham's first MP, Thomas Attwood, who campaigned for universal suffrage in the early 19th century. 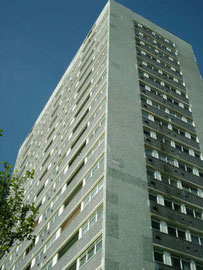 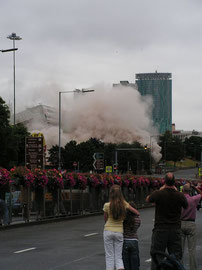 
An Act of 1818 set up a Commission with a £1 million to build churches as a thanksgiving for victory at Waterloo in 1815. Thomas Rickman was a pioneer of the gothic revival, but he also designed two of the Commissioners' churches in Birmingham in a neo-classical style: St Peter's, Dale End in 1825 (now demolished) and St Thomas' at Lee Bank in the same year.

The Gazette described the character of St Thomas' as 'of great simplicity, and in every respect consistent with the sacred purpose to which it is dedicated.' The neo-classical rather than gothic designs may have been the result of a rumour in The Quarterly Review, later denied, that the Commissioners wanted no more gothic churches.


All but the fine tower of St Thomas' and classical west portico was destroyed by German bombs in 1940, and the church was never rebuilt. The grounds were laid out for the coronation of Queen Elizabeth II in 1953 when the gravestones were removed and the dead reinterred at Warstone Lane Cemetery. The gardens were relaid as the Peace Garden c1990. The (First World) War Memorial colonnade, which had been built as part of the Hall of Memory project in 1925, was re-erected here when Centenary Square was laid out 1989.

Famine in Ireland from 1846 encouraged a wave of emigration, many people heading to England. By 1851 4% of Birmingham's population was Irish with numbers continuing to increase. As most were Roman Catholics, the church of St Catherine of Sienna was built on the Horse Fair in 1875 to cater for their needs.

This gothic-style building was demolished c1965 as part of the Inner Ring Road project and an innovative new church was built on Bristol Street a little further out of the city. This circular domed building on the corner of Irving Street is built of brick and concrete with a central altar. Inside the church the Stations of the Cross in coloured relief are a memento of the old building.