Although closely related neighbours and with names of a common origin, Balsall Heath and Bordesley have different adminstrative histories. While Bordesley lay within the ancient parish and manor of Aston in Warwickshire, Balsall Heath was part of Kings Norton and therefore in Worcestershire. In early Anglo-Saxon times the former paid tribute to the Anglian kingdom of Mercia with its royal capital at Tamworth; Balsall Heath on the other hand, was near the northern limit of the kingdom of the Hwicce, a West Saxon people whose territory stretched up from the south along the Severn valley.


Bordesley amalgamated with Birmingham in 1838, while Balsall Heath separated from Kings Norton to amalgamate with the City in 1891 (Kings Norton joined the City 20 years later). With local government reorganisation in 1974 both became part of the City of Birmingham Metropolitan District within the County of West Midlands.


However, these two districts seem to share a common ancestor. The name, Balsall is first found as Bordeshale, which derives from the Old English Bord's healh meaning 'Bord's nook'. It is not easy to find a simple modern equivalent for the topographical word 'nook'. It implies a corner, a small area, perhaps a sheltered hollow in the landscape, protected by trees, maybe within a river-bend.

A nook was also a traditional measurement unit of land area in the Midlands and northern England. Originally ½ virgate, a nook could measure anything between 20 and 40 acres/ c8-16 hectares. The term was also used loosely of a field or defined area of about that size.

Bord means 'boards' or 'planks', but it is also a male personal name. This is likely to be the same name that is found in neighbouring Bordesley, and may well refer to the same person. It may be conjectured that Bord was an early Anglian settler who had cleared farmland at Bordesley and who also owned land nearby at Balsall. While it is known that the later heath lay along the Moseley Road, it is hard to guess where 'Bord's nook' may have been. It may actually have lain within the same manor of Bordesley in Warwickshire and not in the neighbouring manor of Kings Norton in Worcestershire where the heath was named at a later date.

Balsall Heath stands on clay. Before 1767 when the Moseley Road was turnpiked, this part of the route to Alcester was notoriously treacherous in wet weather as the clay turned to slimy mud. In winter the road grew ever wider as travellers avoided the worsening conditions along the original route.

And in a hot summer the ground baked into hard deep ridges, which would have been equally difficult to negotiate. However, this clay, so difficult for travellers, was a valuable economic resource from the 18th century and was extensively dug for brick-making. During the 19th-century many local houses were built of clay excavated on site or near by.

The origin of the heath is something of mystery: clay lands are naturally not heathland but forest. So this heath may have been the result of clearance, perhaps by medieval charcoal burners supplying the essential fuel for Birmingham's many iron foundries.

The heath extended along the Moseley Road between Belgrave Road and Edgbaston Road until the open land was enclosed in 1767 with the opening of the Alcester turnpike. At that time the course of the road was determined and the land on each side was parcelled out in regular fields.

William Hutton writing in 1781 was a little less scathing about this road than he was about some other local turnpikes:

To Alcester, about twenty [miles], formed in 1767, upon a tolerable plan, but it is rather too narrow, through a desolate country, which scarcely defrays the expence; but that country seems to improve with the road.

The present residential district took its name after the laying out of Balsall Heath Road in 1829 as a speculative building investment that was initially aimed to attract Birmingham's growing middle class. The developers had ideas of creating another Edgbaston, but the estate lacked the strict controls imposed by the Calthorpe dynasty. Plots were freehold not leasehold and consequently there were no restrictions on the quality or density of housing. However, good quality housing continued to be built along the Moseley Road.

Some industrialised examples remain near Highgate Road and a much altered double-fronted house next to the library is now a Sikh gurdwara. Good examples also remain at the top end of Mary Street. Building continued into the 1850s and 1860s and rapidly spread to the east side of the Moseley Road where rows of terraced houses were more densely packed together.


By the last quarter of the 19th century the district had developed as an affluent suburb of Birmingham, although administratively it was still the most northerly part of the rural manor of Kings Norton. The residents voted to amalgamate with Birmingham in 1891, largely encouraged by the lower council rates in the City. Showell's 1888 Dictionary of Birmingham describes the district:

Edwardes-street [now Edward Road] takes its name from the last owner of the estate, who, if he could now but glance over the property, would be not a little astonished at the changes which have taken place in the last forty years, for, like unto Aston, it may be said to really form but a portion of the ever-extending town of Birmingham.


Balsall Heath, which is in the parish of King's Norton, has now a Local Board (with its offices in Lime Grove, Moseley Road) several Board schools, chapels, and churches, a police court, and that sure mark of advancement, a local newspaper.


However, from this time, the status of the district began a gradual decline. Houses were increasingly crammed into every available space and towards the Highgate boundary courts of back-to-backs were erected in the large gardens of earlier houses. Middle-class residents began to move further out towards Moseley and Kings Heath. 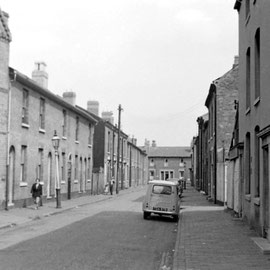 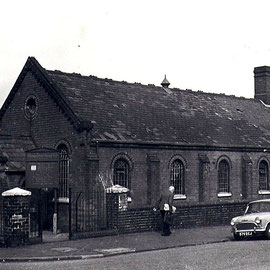 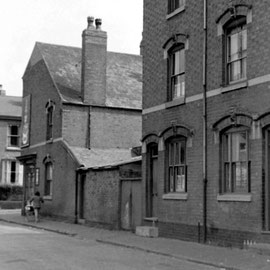 The Moseley Road around Edward Road was, and still is, at the heart of the district. St Paul's Church was built here in 1853 on the road of the same name (It was demolished c1980), the offices of the Local Board were built in Lime Grove c1876 (also now demolished). And here too are Moseley Road Library, Moseley Road Baths and the former Moseley Road Art School all of them well worth a look.


The building of the Moseley Road Library in 1895 honoured the promise of Birmingham City Council which had been made to induce the residents to vote for amalgamation. Cossins & Peacock designed the building in terracotta and red brick in a freely interpreted Flemish Renaissance/ Arts & Crafts style. There is a prominent terracotta City coat-of-arms over the doorway beneath a tall clock tower, which was intentionally designed to be a local landmark. Internally the high arcaded hall has a beaux-arts plaster frieze in neo-classical style. This is a fine Victorian building and a fortunate survival of the extensive redevelopment of the district in the 1970s.


The adjacent Moseley Road Baths were built in 1907. Although the site had been acquired at the same time as that of the library, the delay in building was caused by the unexpectedly great depth to which the well had to be sunk - 225 metres. The well was used as an emergency water supply for fire-fighting during World War 2 and is still in existence though no longer in use.

There are two swimming pools, one with a spectators' gallery, and there are washing baths and laundry facilities, which still exist though they are no longer in use. On the top floor internal accommodation for a caretaker was also built into the scheme. Remarkably the baths' cold water tank is housed in the loft of the building, as it would be in a domestic house. The tank holds thousands of gallons of water and is almost as large as one of the swimming pools. The City's coat-of-arms in coloured relief is ostentatiously displayed over the main entrance doorway. The pair of towers which serve as air vents and the buff terracotta were added in the Edwardian period by William Hale. Both library and baths are Grade II Listed buildings.

Image above right: Balsall Heath Public Baths and Free Library - This splendidly ornate building consists of the free library (the far clock tower and the section with the three large gabled windows) built in 1895, and the Baths (the nearer twin-towered section and chimney) which was added in 1907. The entrance in the centre of the Baths section, beneath the sculptured figures, is labelled "Women's Baths" while the entrances to the left and right are labelled "Men's Baths Second Class" and "Men's Baths First Class" respectively.

The former Moseley Road Art School stands opposite the swimming baths and the library. Designed by W H Bidlake in a neo-classical style with Arts & Crafts details, the school was built as the first local branch of the Central School of Art in Margaret Street. The foundation stone was laid by Alderman, the Rt Hon William Kenrick on 8 May 1899. A junior art department opened for boys in 1900 and for girls in 1921.

In 1945 the school left college control to become a secondary school as Moseley Road Art School; some 300 pupils followed the usual secondary curriculum, but were selected for entry on grounds of their artistic ability.

Closed as an art school in 1975, it became for a time part of Moseley Grammar School. The building is now owned by the British Association of Muslims and is Grade II Listed.

Below: Heath Mount Primary School, built in 1970, replaced the old Mary Street School built in 1878 on the other side of the road.

The area adjacent to Highgate had deteriorated badly by the mid-20th century and was demolished wholesale. In the late 1960s and early 1970s this part of Balsall Heath was completely rebuilt. However, housing in other parts of Balsall Heath was renovated during the 1970s and restored to a good standard. Typical of the old and new are two of the schools serving the area: Tindal Primary School was opened in 1880 and, with many alterations, still stands; Heath Mount Primary School was opened in 1970 ahead of the new housing developments and replaced Mary Street School which had been built in 1878 on a site opposite its successor.

Birmingham's first mosque was opened in 1943 in a house at the lower end of Edward Road to serve the needs of a small Yemeni population. It is still there and in use as Balsall Heath still has a significant number of people of Yemeni origin. As the mosque is on the west side of the River Rea, it is, strictly speaking, in Edgbaston, but many local people there would consider themselves as living in Balsall Heath.

St Paul's, a gothic church which had stood on the Moseley Road since 1853, was demolished c1980 and replaced with an innovative multi-purpose building shared with the United Reformed Church (the former Church of Christ on the Moseley Road).


Standing at the junction of Mary Street and Edward Road, Balsall Heath Church Centre is unprepossessing from the outside, but innovative and well-designed on the inside. It has stained glass from the old church: the Annunciation by Walter Camm in Burne-Jones style, and a window showing St Paul standing between the tramlines in the middle of the Moseley Road. Also from the old building are the bell and the War Memorial, which is set into the wall on Edward Road.

Grateful thanks for the use of this image to E W Green, Historic Buildings in Pen & Ink - The Work of William Albert Green. All Rights Reserved.

Below: Balsall Heath Church Centre – the main entrance in Edward Road. The bell was brought from the old church.