This name is synonymous with chocolate.

A rural district of scattered settlement, this area was usually considered to be part of Stirchley Street until 1879, when the chocolate makers, Richard and George Cadbury moved their town centre factory from Bridge Street, off Broad Street, to a greenfield site between Bournville Lane and Linden Road.

The factory's first address was given as Bournbrook. Bournbrook Cottage stood on the site of Cadbury's present main reception area on Bournville Lane and the 18th-century Bournbrook Hall stood opposite on the south side of Bournville Lane. The walls of the hall's kitchen garden still survive on the corner of Bournville Lane and Linden Road. The stream called the Bourn runs west-to-east through the Bournville factory site. To this the Cadbury brothers added the French word ville meaning 'town', for it was fashionable at that time for confectionery to be thought to be French or Swiss.

(Follow this link for the district now called Bournbrook.)


The Bourn, which joins the River Rea at Stirchley near Cartland Road, was a boundary stream named in King Offa's Kings Norton Charter of 699 AD. The boundaries of the land unit were described with reference to recognised landmarks by means of which the estate could be perambulated. The first of these was, on Leontan thaet cume on Blacan Mere: 'from the (River) Leontan to where it (ie. the boundary) comes to the Black Pool'. The Leontan is a lost river name and may refer to either the Bourn or the Rea. It perhaps better describes the Bourn-Rea confluence near the junction of Cartland Road and River Brook Drive. This is evidenced by Blackpool Field which was recorded in 1843 off the Pershore Road near Hazelwell Road.

The 18th-century Bournbrook Hall stood on a rising hill across Bournville Lane from the Cadbury factory and overlooked the valley of the Bourne. This small stream runs west to east through the factory site. The hall was a large 3-storey building built in a neo-classical style with extensive grounds which were bought by Cadburys and the hall was subsequently demolished.


On the corner of Bournville Lane and Linden Road stands the Old Farm Hotel. Formerly Bournbrook Hall Farm, it was part of the Bournbrook Hall estate until the Cadburys bought the land some time after 1890. By that time the farmhouse had become a cider house, The Old Farm Inn. The Cadburys were Quakers who would not tolerate alcohol on their property, so the inn was closed. However, it is reputed that they did take on the landlady to work as a tea lady in the dining room of the new factory.

Well worth a visit - Bournville Village.

This is one of the city's designated Conservation Areas. In 1879 the Cadbury brothers built sixteen cottages for key workers on Bournville Lane adjacent to their new factory - this is now the site of the factory dining rooms. With the factory established, George Cadbury turned his attention to housing more of his workforce. In 1895 he set up a spacious building estate to lease well-built houses to working people.

No.222 Mary Vale Road was the first house to be built on the estate with the shops on the corner of Linden Road following three years later. These were restored in 2009. The houses here were set back by front gardens and had generous rear vegetable gardens. The roads of the estate were lined with trees. Cadbury wanted to give workers a better environment than the slums of the town centre and to avoid the speculative overcrowding that was beginning to take place in nearby Selly Oak. 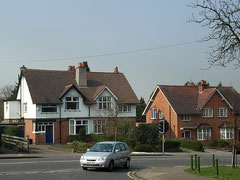 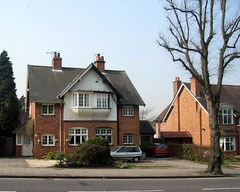 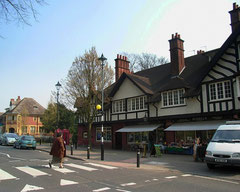 In Linden Road is the Anglican church of St Francis of Assisi, originally set up in 1913 as a mission of St Mary's, Selly Oak. The present church, a Grade II Listed building designed by Harvey, is a red-brick romanesque-style building which was consecrated in 1925, the first church to be built in Birmingham after World War 1.

The Byzantine-style carving inside was carried out by Birmingham-based sculptor, William Bloye in 1926. Over the south porch a lunette carved in oak in 1933 also by Bloye, depicts St Francis' Sermon to the Birds.

A matching lunette over the north porch was carved by Birmingham sculptor John Poole in 1964 to represent St Francis' Canticle to the Sun.


Other Grade II Listed buildings by Harvey include the Friends Meeting House on The Green which was built in 1905 in red brick with stone dressings; it is unusually elaborate for a Quaker meeting house. The central hall is rectangular with subsidiary rooms in the gabled wings; the roof trusses are notable being made like crucks. At the north-west corner stands an octagonal staircase turret with a high pointed tiled cap. Overlooking Bournville village green is a bust of George Cadbury underneath which are his ashes and those of his second wife Dame Elizabeth Cadbury.


On Linden Road the Bournville Undenominational School opened in 1904 in the Ruskin Memorial Hall with accommodation for 278 children. This building, now the junior school, is designed in a Tudor style but influenced by Art Nouveau. Beneath the first floor bay window is a frieze of 1914. Five stone panels in Arts & Crafts style by Benjamin Creswick, a teacher at the Birmingham School of Art, depict classical dancers.

Bournville Rest House was built in 1913 to celebrate George and Elizabeth Cadbury's Silver Wedding and was paid for by the factory employees. The design is also by Harvey and is based on Dunster's medieval butter market in Somerset. It is currently the Carillon Visitors' Centre. An inscription inside reads:

This Rest House was erected to commemorate the Silver Wedding of Mr. & Mrs. George Cadbury by the employees of Cadbury Brothers Ltd. at Bournville and in all parts of the world. A lasting memorial of esteem and affection as an expression of gratitude for the unceasing interest in their welfare and in admiration of manifold services to the world at large.


Bournville Infant School is also Harvey's. Built in 1910 it was paid for by George and Elizabeth Cadbury. It is built in the style of a Tudor manor-house and has timber-framed gables, steep tiled roofs and Elizabethan chimneys.

Both school buildings, according to Cadbury's wishes, were constructed to standards far in excess of those at the time required by Kings Norton & Northfield Urban District Council.

Bournville Day Continuation School opened in 1925 to further the education of young Cadbury employees, a mission close to George Cadbury's heart from the early days of Bournville.

Attendance was compulsory for all workers aged 14 to 18, male clerks attended until they were 19 and apprentices until age 21. As well as academic lessons in English, maths and science, also on the curriculum were physical education and handicrafts. By the 1930s other local firms sent their young workers here and some 3000 students attended on day release.

The building is now part of the University of Central England, now Birmingham City University.

The Cadbury Factory is well worth a look.


Altered many times over the years, the chocolate factory is pleasantly set among trees and cricket pitches. 'Cadbury World' has been set up as a tourist attraction to show visitors the history and manufacture of chocolate.

Image from Helen Cadbury Alexander 1906 Richard Cadbury of Birmingham - a work now out of copyright.

Richard Cadbury built the Bournville Almshouses in 1897 around a quadrangle on the corner of Linden Road and Mary Vale Road. Built mainly, but not exclusively for pensioners of Cadbury Brothers, this group of almshouses still exists today. The almshouses were paid for by the rent from 35 houses which were built at the same time.

In 1900, the Bournville Village Trust was set up as an independent body to formally control the development of the estate. By this time the estate covered some 130 hectares and over 300 houses had been built. The Trust also focussed on providing schools, hospitals, museums, public baths and reading rooms. By 1914 Bournville, established as one of the first garden suburbs in the country, was centred on the village green at Sycamore Road/ Linden Road.

Within ten years there was a range of good quality housing with shops, schools, an arts & crafts institute, places of worship and generous open spaces and recreation grounds. The houses and other buildings on the estate were influenced by Arts & Crafts principles and designed by Cadbury's resident architect, William Alexander Harvey. Trained at the Birmingham Municipal School of Art and aged only 20, Harvey was to have a great deal of influence in realising Cadbury's ideas for a garden suburb that was within the aspirations of working people.


Not only are the houses well designed, many of Bournville's public buildings are Listed buildings. At the heart of the village is the shopping parade, built between 1905 and 1908, the shops were designed in mock-Tudor style by Bedford Tyler.

Below: A selection of photographs and drawings from W Alexander Harvey 1906 The Model Village and its Cottages: Bournville, showing the variety of styles available. Photographs by T Lewis and Harold Baker of Birmingham, drawings by the author, the architect of Bournville downloaded from the Internet Archive.

Image below by mikeyashworth on flickr, made available for reuse under Creative Commons licence Attribution-NonCommercial-NoDerivs 2.0 Generic (CC BY-NC-ND 2.0).

Map of Bournville, Birmingham - from Village Trust booklet of c1931

An interesting map of the Bournville site as developed by c1930 and showing some of the intended schemes. Primarily this shows the 'overspill' across Bristol Road (A38) towards Weoley Castle.