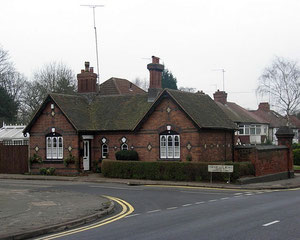 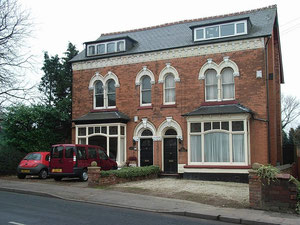 Lying between the Chester Road and Court Lane was a lake which was known variously as Bowen Pool, Baldmoor, Baldmoor Lake and Bolemore Lake. The word moor derives from Anglo-Saxon/ Middle English and means 'boggy land'. The other element may derive from the Middle English word bald meaning 'a white patch' which gives us the modern meaning of the word. Here it may indicate a treeless patch. Bald meaning 'bold' was also used by the Anglo-Saxons as a personal name.

The lake is not shown on the 1834 Ordnance Survey map. However, the 1841 Census records eight families living at Baldmoor Lake, presumably along the Chester Road. It was a small working-class community with agricultural labourers, a wire drawer (probably working at Penns Mill), a painter and a carrier who had been born in Ireland. Joseph Armishaw was the publican, probably of the pub which was rebuilt between the wars, the New Oscott Tavern, and which is now known as Th@i The Place 2B.


Boldmere Road, which took its name from the lake and from which the district subsequently took its name, is shown though not named on the Ordnance Survey map of 1834.


Housing development around Boldmere Road dates from the end of the 19th and beginning of the 20th century. Undoubtedly urban development was encouraged by the opening of Wylde Green station in 1862 and of Chester Road station in 1863 on the Sutton Coldfield Branch Line.

On Boldmere Road the Sutton Park Hotel was established in the mid-19th century. It serviced more than local trade and was probably built to capitalise on the increasing use of Sutton Park for recreation by visitors from Birmingham especially after the coming of the railway. The present building replaced the original in the first half of the 20th century.

At Gate Lane the Gate Inn was built around the same time. Housed in a simple early Victorian building, it was known as the Boldmere Hotel by the time it was demolished in 1938. During the 1930s a wave of private building filled in those areas still vacant. And at this time the old Gate Inn was replaced by the present building which opened in 1939; it was renamed the Harvester in the late 20th century.


Boldmere is now focused around the shopping centre at the north end of Boldmere Road. Shops at the south end of the road are known locally as Little Boldmere.

Powells Mill on Longmore Brook near Sutton Park's Boldmere Gate was a centre of innovation in the 18th century. The millhouse stood at the north end of the dam alongside Stonehouse Road. In 1733 John Wyatt used the mill to experiment with the world's first cotton-spinning machine. It was here that was made the first mechanically-spun reel of cotton.


The mill was used for spade making by William Powell in 1750; ash trees were planted nearby to be coppiced for the spade handles. And it is believed that the world's first all-steel garden fork was made at this mill. By 1882 the mill was used to roll steel for making pen nibs, a booming industry at the time. Out of use for many years, the dilapidated mill buildings were demolished after 1936 and no visible traces now remain. The area was subsequently landscaped and a waterfall flows where the millrace had previously flowed through the dam.


Largely due to the efforts of Rev W K Riland Bedford, Boldmere National School for girls and infants opened on Boldmere Road in 1848. The building was used as the district's Anglican church until St Michael's was built in 1857. The old school now serves as a health clinic.


Well worth a look - Boldmere Church
Designed in a simple decorated gothic style by J F Wedmore in rock-faced stone, St Michael's was enlarged in 1871 as the district continued to expand, and the spire was built. The church was further extended with a south aisle in 1895 by J A Chatwin. The churchyard was used for burials from the beginning, but was extended onto adjacent land in 1914 and again in 1937 when a new phase of house building began in the north of the district. In 1964 a devastating fire destroyed all but the church tower and the south aisle. The main body of the church was then unusually and controversially replaced in plain blue engineering brick.

Well worth a listen - Boldmere bells
Boldmere's church bells are of interest. During the 1890s John Taylor of Loughborough perfected the scientific tuning of bells, whereby the various notes and harmonics of the bell harmonised with dominant note, thus giving a melodious chord. The first true harmonic ring in Birmingham was installed at St Barnabas in Erdington by Taylor's in 1904. However, Boldmere's eight bells are a rare complete Birmingham ring which was cast in the old way. Made in 1906 by Barwell's of Birmingham, their tonal quality is 18th-19th century. They are a rare survival in Birmingham, a leading centre of bellringing. In Birmingham few pre-scientific bells remain, most having been recast during the 20th century by Taylor's or by the Whitechapel Foundry in accordance with scientific tuning.

Click on the images in the Boldmere Gallery below to enlarge them. 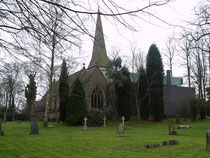 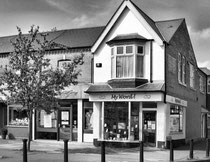