First recorded as Brander End, this placename has its origins in the Old English word brende meaning 'burnt'. This area of east of the River Rea lies on heavy clay whose natural cover was dense oak forest. In the early Middle Ages woodland was deliberately burned to create clearings for farmland, a process not lightly undertaken. Mature trees are not easy to burn and very difficult to uproot. Furthermore, not only was woodland a valuable resource, but steep fines could be imposed on any who burnt another's trees. Burning may also, of course, have been the result of an accidental or natural occurrence such as lightning.


Around the junction of Brandwood Road and Dawberry Fields Road were fields known as 'Blacklands'. These were named by later settlers who recognised that the soil was blacker here than the virgin earth, because the land had been previously cultivated. It is possible that these were fields of the Roman period abandonned at the time of the downfall of the Roman Empire. If that is the case, it may be that the tree cover was younger and not so dense and thus more easily burnt.


The tiny hamlet at Brandwood End was on Brandwood Road near its junction with Broad Lane. This was an entirely rural area until after the end of World War 1 when housing development, largely private, spread outwards from Kings Heath.


Brandwood House in Dawberry Fields Road is first found in the records in 1638 but it is likely to be of older foundation. It was a large house in neo-classical style built on a high prominence and set in extensive grounds, and was owned by the Gem family who had legal interests in Birmingham. In 1890 the house was bought by G F Lyndon who was in the tool-making business.

With many alterations and additions the building was used as a golf clubhouse in the early 20th century, then served as the Automobile Association HQ from 1936. In 1967 Brandwood House became the Regional Headquarters of the 202 (Midlands) General Hospital. The Royal Army Medical Corps (Volunteer) was born and officially came into being on the 1st Apr 1967 in Kings Heath. The field hospital based here could be sent anywhere in the world to be set up in tents or existing buildings to provide secondary medical care to soldiers in the field.

Take a look - Stratford-upon-Avon Canal which passes through the district in a tunnel. Designed by Josiah Clowes at the height of the canal-building era, it leaves the Worcester & Birmingham Canal at Kings Norton Junction and travels 40 kilometres via 56 locks to Stratford.

The first section from Kings Norton to Hockley Heath was opened in 1796 but the canal did not reach Stratford until 1816. Although this canal was financed by Stratford companies, it probably benefited Birmingham businesses more than those of Stratford.


With railway competition and a decline in canal use especially after World War 2, the waterway was not maintained and the southern section became almost unnavigable.

Thanks to the efforts of the Stratford-upon-Avon Canal Society which had been founded in 1958, the canal was laboriously restored and reopened by the Queen Mother in 1964. The portals of Brandwood Tunnel are Grade II Listed.

Take a look at Brandwood Cemetery which was opened in 1899 by Kings Norton & Northfield Urban District Council. The cemetery chapel building in red brick and terracotta is an interesting design by the Moseley architect, Brewin Holmes and consists of a central spire with a very high archway under which the road passes. On either side are symmetrical and elaborate gothic chapels, one Anglican, the other non-conformist.

The cemetery is laid out with wide avenues of mature evergreen trees. It was taken over by Birmingham City Council in 1911 when the Kings Norton & Northfield districts amalgamated with Birmingham. A Jewish section was opened in 1919 and there is now a section for Muslims.

Click on the images in the Brandwood Gallery below  to enlarge them. 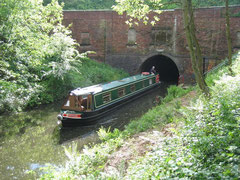 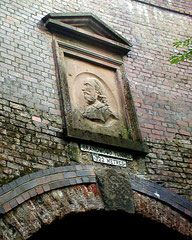 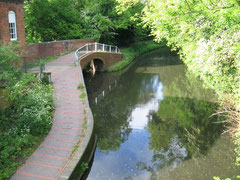 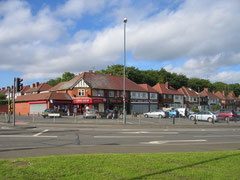 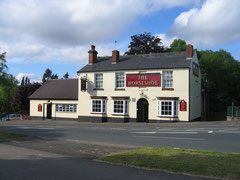 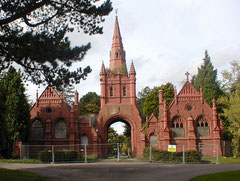