formerly in Warwickshire - one of the Domesday manors of Birmingham

There are a number of Wittons in England. Here the name may originate from the Anglo-Saxon, wic tun meaning 'dairy farm', probably the outpost of a mother farm or village elsewhere, possibly Aston. The arable land here on the Birmingham sandstone ridge may have been cleared by earlier peoples and reverted to light cover of gorse, broom and heather before the arrival of the Anglians. Much of the land here would have been fairly easy to clear and plough, although it is not especially fertile and does not retain water well. However, Witton is close to the River Tame and there would have been lush grazing for cattle on its floodplain.

There is another intriguing explanation of this placename. Wic is a common placename element but is usually found as the second part of a name eg. Bromwich, which means broom dairy-farm. Where it occurs as the first element it usually, though not always, derives from the Latin word vicus, the term used for a civilian settlement often outside the gates of a Roman garrison or fort. Most such wic names are found near to Roman roads and many have been found to be close to known Romano-British settlements. While there is no known Roman settlement here, the probable route of Icknield Street passes not far to the west en route from Metchley Roman fort to Holford, where it crossed the River Tame. The route may now be represented by Stoneleigh Road and Wellhead Lane. Evidence of the road can still be seen where it crosses the west side of Sutton Park before going on to the Roman fort at Wall near Lichfield. Furthermore the remains of a 2nd-century Romano-British kiln were found in 1959 in a garden on Wellington Road. That site is just 300m west of Icknield Street and the potters must have lived in a hamlet nearby. However, this interpretation is very far from certain.

The manor is listed in the Domesday Book as being held by an Anglo-Saxon, Stanketel/ Stannachetel from his overlord, William FitzAnsculf of Dudley Castle. This was unusual: most Birmingham manors were in the hands of Norman lords soon after the Norman Conquest.

Although Anglo-Saxon, not only did Stanketel continue as lord of the manor but increased its taxable value from 10 shillings in 1066 to 20 shillings in 1086. This was again unusual: due to the upheaval of the Conquest, some manors remained worth the same, many lost value between those dates.


The next record of the manor dates from 1241 when a perambulation was carried out to confirm the boundary between the estate of Andrew de Witton and that of William of Perry. The manor passed through many hands, some by inheritance, others by purchase. These included the Perry family, the de la Hays, the Estes/ Easts of Hay Hall in Yardley and the Bonds of Ward End.

The manor was sold in the mid-18th century to John Wyrley Birch on whose death in 1775 the estate was inherited by his relative George Birch, whose son Wyrley was lord of the manor in 1850.

The manor house, Witton Hall which still stands at the junction of Brookvale Road and George Road, was built c1730 probably by William Allestree/ Allestrey of Yardley. This three-storey red-brick hall was much remodelled in the 19th century. It was a private school in 1850. The 1861 Census shows that the school was run by 68-year-old Mary Shyrle and her sister. There was a total of six staff including ancillaries and eight boys aged from 5 to 13 pupils are listed as pupils. There may have been more, but the Census was taken on 5 April; other pupils may have been at home for the Easter holidays (Easter fell on 28 March that year).

In 1907 it was converted into a home for the elderly by the Aston Board of Guardians and later taken over by Birmingham City Council who continued to use it for this purpose until the early 1960s. There have been many extensions and internal alterations before and after the Second World War, but the original block still stands, now converted into flats.

William Hutton writing in his History of Birmingham in 1783 felt the hall should have been graced by a moat:

The house, left by its owners, is in that low, or rather boggy situation, suitable to the fashion of those times. I can discover no traces of a moat, though there is every conveniency for one: We are doubly hurt by seeing a house in a miserable hole, when joining an elegible spot.

The Witton crossing of the River Tame on Witton Road was recorded as 'the foul ford' in 1460, though it probably dates from earliest times. Presumably the ford was a difficult one on clay and a crossing of necessity not preference.

There was a timber bridge here from 1358. The manor was part of the parish of Aston and Witton Road was the churchway to Aston and had to be maintained by the parishioners. Witton Lane is of equal antiquity runs via Aston Lane to a better river crossing on the Lichfield Road at Salford Bridge. Witton is known to have had two open fields whose locations are unknown. When Witton Common was enclosed in 1802, the fields had already been enclosed.

A watermill stood off Gypsy Lane at the lower end of Upper Witton Pools now known as Witton Lakes. Birmingham Corporation bought the lakes as a fishing reserve in 1914 and the surrounding area was opened as a public park some ten years later.

Near the junction of George Road and Park Road at the southern end of Brookvale Park boating lake stood Witton Forge from the 17th century. Fed by Hawthorn Brook this was known as Lower Witton Pool and was used in the 19th century as a reservoir for drinking water until Elan Valley water was brought to Birmingham in 1904. The pool and surrounding land was subsequently bought by Erdington council as Brookvale Park.

Off Brookvale Road is Birmingham City Cemetery better known as Witton Cemetery. This 40 hectare site in open countryside was opened by the town council in 1860 as a result of recommendations in Robert Rawlinson's Enquiry into the Public Health of the Borough which strongly criticised burial practices in the increasingly crowded town centre.

During the third quarter of the 19th century, as a result of the opening of the cemetery at Witton, the council was able to close most of the town centre burial grounds.

Until 1911 this was the Corporation's only cemetery, though there were private cemeteries. There is a small octagonal chapel here with a steep pitched roof and the lodges, gates, piers and cemetery railings are all Grade II Listed.

There are chapels for Anglicans, Catholics and Non-Conformists and an adjacent plot bought by the Jewish community in 1869.

George Kynoch began his industrial career making percussion caps in Great Hampton Street before moving to the Lion Works at Witton in the 1860s. After Kynoch absconded to South Africa to avoid his creditors, the company expanded into the production of brass, copper and steel castings. By the time the name was changed to ICI Metals in 1929, the factory was producing a range of goods including bicycles, paper, soap, gas engines, and, during World War I, munitions. A stone memorial to the company's employees who died in the war is built into the gatehouse wall. ICI Metals later became IMI, Imperial Metal Industries. The site of Kynoch's Percussion Cap Works between Aston Lane and Witton Road is currently being redeveloped for industry.

The General Electric Company bought land at Witton in 1899 and in 1901 began building its large factory together with houses for its workers. At one time, the company was employing 18,000 people on the site. The Witton works remained one of the company's biggest sites, producing high-voltage switchgear and transformers, small motors, mercury arc rectifiers and traction components, until the plant was sold off in 1969; industrial and warehouse units have subsequently been built on the site.

Image below: The art deco office buildings of the General Electric Company in Electric Avenue designed by Wallis, Gilbert and Partners 1920 have been retained as a façade to a modern warehouse. Photograph and text by Oosoom 2007 reused under Creative Commons Attribution-Share Alike 3.0 Unported licence.

Twenty farms are known to have existed in Witton in 1730; Witton Farm lay between Cheshire Road and Wyrley Road. In 1848 there were 157 inhabitants. And the district continued as a rural area until the building of the General Electric factory in 1901 which spurred development of working-class housing around Deykin Road. After World War 1 a municipal housing estate was developed at Upper Witton between Gypsy Lane and The Ridgeway. Development continued after World War 2, although some fields remained as late as the 1950s.

The shopping centre of Witton at the junction of Witton Road, Witton Lane and Aston Lane is known as Witton Cross, or Witton Island and may date from the setting up of the Outer Circle bus route in 1928. However, most of the residential district lies to the north between Erdington and Perry Barr.

Witton Common is shown on James Sherriff's 1798 in the Goosemoor Lane area; it is probably the same as Perry Common.

To the Anglo-Saxons the term slaed meant a 'little valley' which was probably boggy. The stream through the valley, Witton Brook runs down to join the River Tame near Spaghetti Junction.

Slade Road and surrounding roads were built with working class housing towards the end of the 19th century. However, new housing was built both before and after the Second World War at the City end of the road. The handsome Brookvale public house (now closed) dates from this time. The road itself was to become a busy linear shopping centre.


Slade Road Council School was opened in 1904 by Warwickshire County Council with accommodation for 620 children. In 1906 a separate boys' department opened accommodating a further 310 pupils.

Only four years later a new boys' department was built for a further 324 and the former building was then used for juniors until 1915 when the school was reorganised for boys, girls and infants. The boys' department became Slade Road Boys County Modern School in 1945. Due to overcrowding additional classes were held after the war in nearby All Saints Parish Hall. 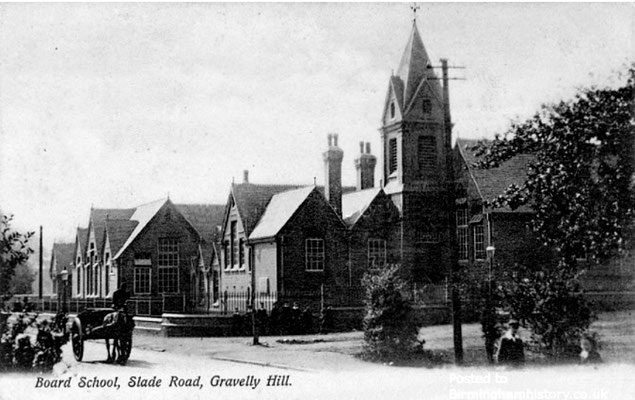 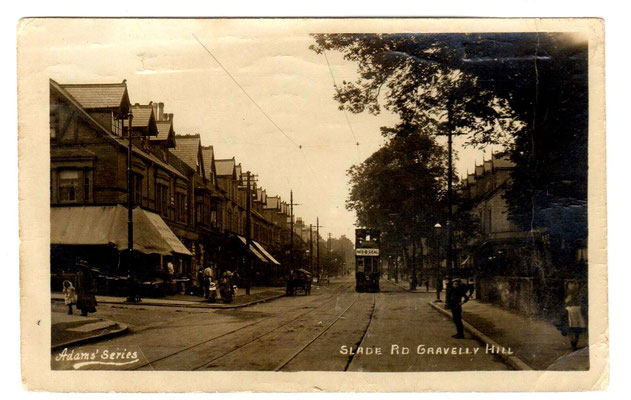 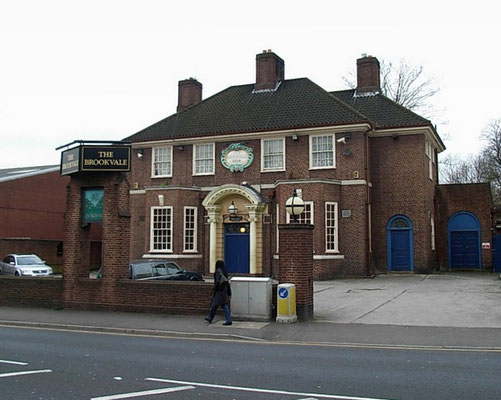 Nearby Slade Waste was recorded in 1620, land on poor soil not well suited to arable or pastoral agriculture.


Slade Common was recorded in 1633, land for local people to graze their livestock. The name is now found only in the street name, Slade Road which was built up in the early 20th century.