This was first a street name, but is now used primarily with reference to the railway station and its immediate surroundings.

This City Centre street which runs from Bull Street to Constitution Hill used to mark the start of the turnpike road to Wolverhampton.

Originally it had the topographical name Sandy Lane, but by 1745 the name had been changed to Snow Hill. This may have been taken from the ancient streetname in central London and was possibly linked to proposed prestige building developments on that side of town. The Weaman estate was developed in the 1770s, the Colmore estate shortly afterwards.


The Birmingham name may have derived from the fact that snow continued to lie here after it had melted elsewhere. Snow Hill faces north-west and would get little sunshine in winter. The period from c1250 to c1500 witnessed a worsening climate and from c1500 to c1850 was known as the Little Ice Age, so lying snow would have been more common in the past than it is now. However, Snow Hill is not an uncommon name across the country and its origins appear to have nothing to do with snow. The names, including that in London, show current or past evidence of a final -r indicating that they derive from the Anglo-Saxon word, snor, the precise meaning of which is uncertain. However, a snorhill would seem to be a twisted path which wound up a hill either to avoid obstacles or to ensure an easier ascent. (Thanks to Keith Briggs for information on this placename - See Acknowledgements.)


What remains of the street of Snow Hill is now part of the Inner Ring Road built in the late 1960s and now known Snow Hill Queensway. When Queen Elizabeth II came to open the Inner Ring Road, then called the Ringway, she was invited to name as Queensway the tunnel between Suffolk Street and Great Charles Street. After driving round the ring road, she named the whole of it The Queensway and so it has remained.


Snow Hill has been the site of a number of interesting ventures.

The world's first mutual building society was set up in here in 1775 by Richard Ketley, the proprietor of the Golden Cross Inn which stood at the corner of Bath Street. St Chads Circus is now on the site.

In 1779 the Birmingham Library was established in Snow Hill as a private subscription club at the home of button-maker, John Lee. There were initially just nineteen members. However, the library soon outgrew its accommodation and after a number of homes, its seventy thousand books were moved in 1899 to new purpose-built premises in Margaret Street, which it now shares with the Birmingham & Midland Institute.

Also on Snow Hill Birmingham's first glassworks was established in 1757 by Mayer Oppenheim who had patented red glass. It was the precursor of many local glassworks and marked the beginning of an industry which would prosper in Birmingham during this and the following century.
Boulton & Son - Matthew Boulton's father, Matthew Boulton Senior, was a buckle and button maker whose small factory was near the family home in Snow Hill. Matthew Boulton Junior joined the business after leaving school c1745. In 1759 his father died and he took over the business. Enabled by the money left him by his father and as a result of two fortuitous marriages, Boulton set about expanding his business. There was no room for further building at Snow Hill but in 1761 he leased 13 acres of land at Soho.

And at the corner of Colmore Row during the 19th century stood the Sulphureous, Fumigating, and Medicated Vapour Baths which were run by a Mr Monro as a medical establishment.

Dunlop tyres were made in their factory on Livery Street opposite Snow Hill Station from the end of the 19th century until after the Second World War.

Snow Hill station was built in 1852 for the Birmingham & Oxford Railway, later part of the Great Western. Originally known as Birmingham Station and housed in a wooden building, it was renamed Snow Hill in 1858. 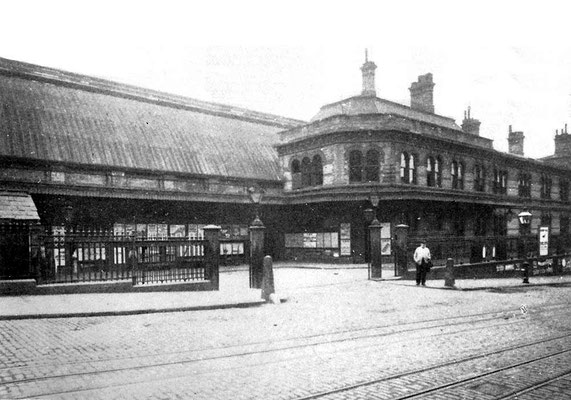 Designed by Isambard Kingdom Brunel the Oxford line was laid in dual gauge, both broad and narrow with a third rail to allow for broad-gauge through-trains from Oxford to Paddington added in 1861. However, from 1868 all Snow Hill trains ran on the standard (narrow) gauge.

The ornate Great Western Hotel in front of the station facing Colmore Row was built in 1863. It did not prove popular and the company used much of the building as its own offices.

Mainline services to Snow Hill were withdrawn 1967 when the electrified New Street-Euston route opened. By 1968 The Birmingham, Wolverhampton & Dudley line was last running from Snow Hill; it closed 1972.

The Great Western Hotel was demolished in 1969 and the 1901 station building closed in 1972 to be demolished five years later.

Snow Hill Tunnel was excavated as a deep cutting. It was to be nearly a quarter of a century before the cutting was roofed and the Great Western Arcade built over it, the first arcade in town. The original roof was destroyed by German bombs during World War 2, but in 1984 the Grade II Listed arcade was fully restored and finished with a traditional-style chiming clock with five bells.

The railway tunnel passes beneath Corporation Street, High Street and Carrs Lane to emerge alongside Moor Street Station. The line then crosses the fifty-eight arches of Brunel's Grade II Listed Bordesley Viaduct across the Rea Valley to Small Heath and Acocks Green, then via Solihull and Warwick to Oxford and London Paddington.

In Livery Street the station walls survive and a gateway bearing the coat-of-arms of the Great Western Railway. The line was reopened from a rebuilt Snow Hill in 1995 and to carry the Midland Metro tramway from 1999. The Sun Alliance Building was built in 1985 on the site of the hotel and a new Snow Hill station rebuilt to the rear which opened in 1987.


In the middle of St Chads Circus in Kennedy Gardens were two mosaics by Kenneth Budd placed here as part of the 1960s Inner Ring Road development. The one is a history of Snow Hill station. Over five metres high and one hundred metres in length, it was one of the largest such murals in the world. With the building of the new ground-level road junction here the mural has been left intact, but buried. See below.

Images below on St Chad's Circus alongside Snow Hill Station:

Left and centre: GWR mosaic by Kenneth Budd photographed in 1970 by Richard Postill/ ricsrailpics on Flickr and used with his kind permission - All Rights Reserved. [These mosaics were buried in situ with the rebuilding of Snow Hill Station and alterations to the road system in 2007. In 2013 Kenneth Budd's son Oliver Budd made a miniature version of the the mural in Colmore Circus.]

Right: John F Kennedy mosaic by Kenneth Budd photographed in 2004 by Brian Burnett on Panoramio and used with his kind permission - All Rights Reserved. [This mosaic was moved to Floodgate Street in Digbeth, Birmingham in 2013.] 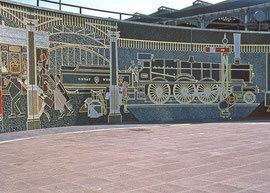 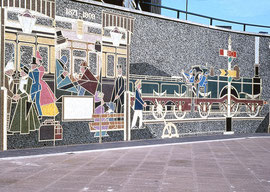 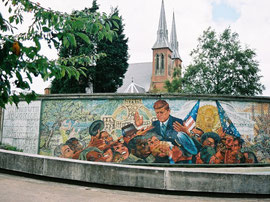