South-eastwards from Camp Hill the district of Sparkbrook straddles the Stratford Road as far as the junction with the Warwick Road. The Sparke family lived around here in the Middle Ages, but it is debatable whether the family was named after the Spark Brook or the stream took its name from the family. As a river name it may mean 'sparkling stream', though the Old English spearca usually refers to a fiery spark. There is another word spearca which means 'brushwood', and the sparrow hawk is called spear-hafoc in Anglo-Saxon, sper-hauk Middle English.


The stream runs from the Belle Walk area at the top of Stoney Lane where its source may be Bullan Wyllan, 'Bull's Spring' mentioned as a boundary mark in the Yardley Charter of AD 972. The boundary went on tha Langan Aec, 'to the Tall Oak' which probably stood at the junction of Stoney Lane and Walford Road, and then to Mundes Dene, 'Mund's Valley' following the Spark Brook to the River Cole confluence north of Tyseley Industrial Estate in Seeleys Road at the east end of the Ackers Sports Centre. As a result of rapid urban development at the end of the 19th century the Spark Brook had become virtually an open sewer and much of it was culverted in 1896. The small stream can still be seen running alongside The Ackers site off Golden Hillock Road.

Spark Green was the area bounded by the Stratford Road, Stoney Lane and Fulham Road. The name may refer to the same area as Maule Green. In the Middle Ages a green was common pasture. A public open space off Leamington Road was named Spark Green Park in the late 20th century.

The Stratford Turnpike was set up in 1726 with tollgates locally at Camp Hill, Ladypool Road and at the River Cole bridge near Shaftmoor Lane. Parishioners owed labour towards the maintenance of highways. With the setting up of the turnpikes they still had to give their statutory annual eight days labour but were now overseen by professional road-makers and with the turnpike company providing materials. A concession to locals was freedom from tolls when using the road for journeys within the parish.


At the junction of Ladypool Road The Angel is a rare good example of a surviving Birmingham Georgian coaching inn in little altered state. The building was refurbished c2015 and is currently (2020) an African/ Caribbean restaurant.

At the Warwick Road junction The Mermaid was a also a coaching inn. Built c1740, it was completely rebuilt in the 1880s when the Tivoli Gardens to the rear were an attraction for town-dwellers who could now take the tram. The corner towers were destroyed by German bombs during the Second World War and not replaced. Aftetr lying empty for many years at the end of the 20th century and being damaged by fire, the building was refurbished and is currently a Portuguese/ Italian restaurant.

A weighbridge was set up at the Mermaid to check the weight of heavy wagons before they were allowed to cross the hump-backed bridges over the streams and rivers. In 1752 and 1759 horses were drowned while fording the River Cole. Subsequently the Worcestershire county authorities built a bridge over the river here. 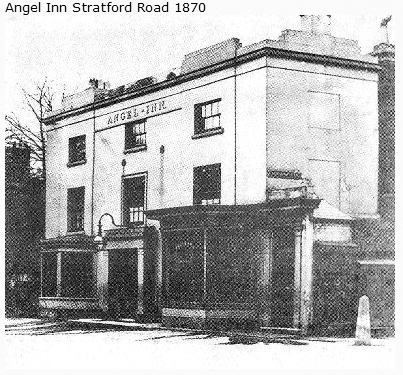 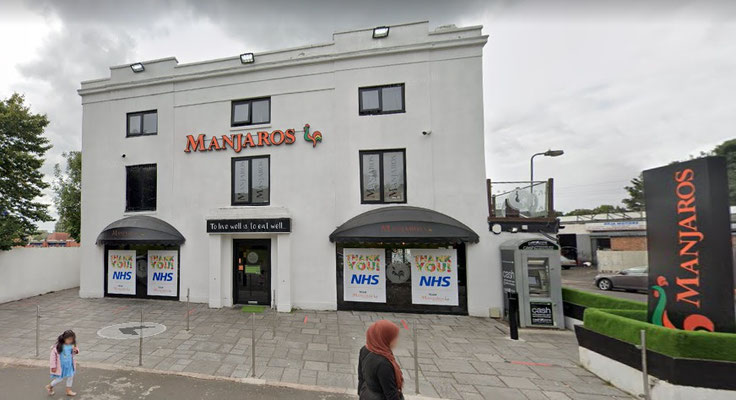 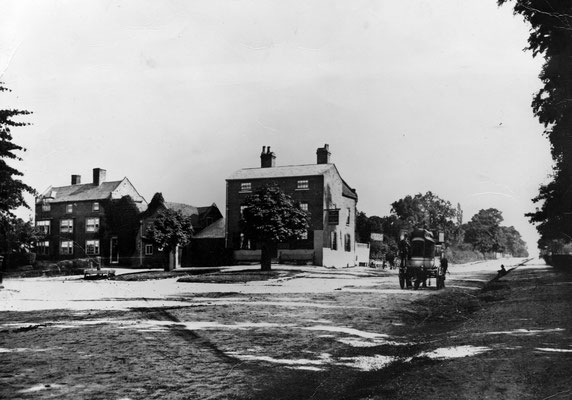 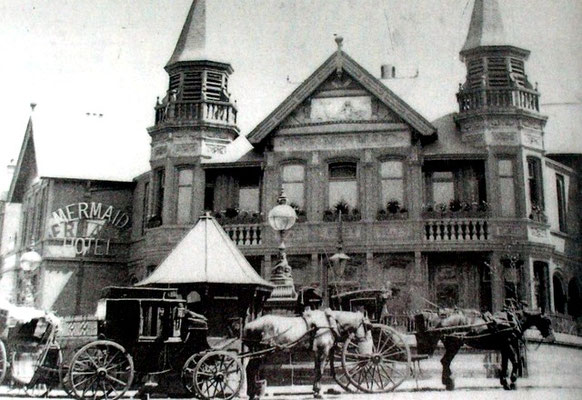 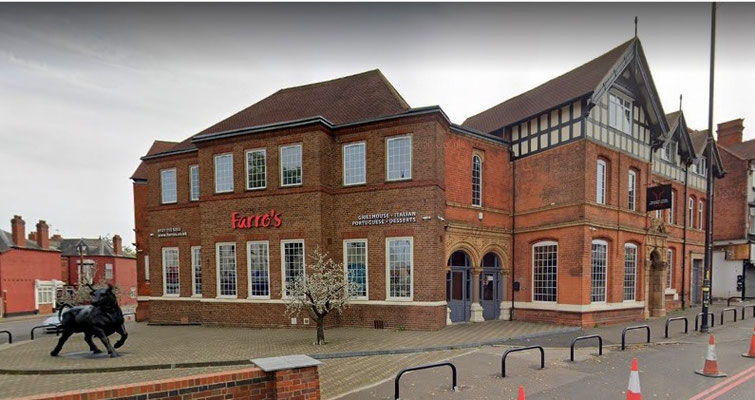 The creation of the turnpikes encouraged wealthy Birmingham business people to move out to the country from where there was much better access.

Take a look - Farm. On Sampson Road stood Owens Farm, an Elizabethan farmhouse which was bought by Birmingham ironmaster Sampson Lloyd II in 1742. Within ten years he had built the large Georgian country house which survives and later demolished the original farm. Lloyd spent most of his time in his large town house in Edgbaston Street returning to his rural retreat at weekends. The house was known to the family simply as 'Farm' but it is sometimes now referred to as Lloyd House. It was given to the City by Alderman Lloyd in the 1920s and the grounds laid out as a public park.

Another country house, Fair Hill, stood between Priestley Road and Larches Street. This was the home of Joseph Priestley until it was destroyed in the 1791 Birmingham Riots. Priestley was minister of the New Meeting in Birmingham and an experimental scientist with his laboratory at Fair Hill; he experimented with electricity, isolated oxygen and invented carbonated water. After the riots Priestley left for the United States and never returned. A stone tablet on the side of No.10 Priestley Road commemorates the man and the site of his house. See 1791 Birmingham Riots.

The house was rebuilt as The Larches and the home of Dr William Withering and later of Thomas Attwood and subsequently of the Galton family. It was demolished c1871. Erasmus Road marks the route of the drive to the house. The site was built over with housing in the 19th-century and again in the 1960s.

Thomas Attwood (1783-1856) was a banker and high bailiff of Birmingham 1811. He was a Birmingham MP who was an influential and very popular Chartist campaigning for fairer representation in parliament. A marble statue of Attwood originally stood at the corner of New Street and Stephenson Place; it was moved nearer to his Larches Green home in 1975. After suffering at the hands of vandals for some years, the statue has recently been removed for renovation.

In 1834 the area was still completely rural. By 1888 building had spread from Birmingham as far as Anderton Road, Palmerston Road and Alfred Road. Neighbouring Balsall Heath and Moseley were built up west of Stoney Lane, and Small Heath to the north was urban. There was building on the Stratford Road at Stoney Lane and Durham Road and around the triangle between the Stratford Road, Warwick Road and Baker Street.

By 1906 Sparkbrook was enclosed by urban Greet and Sparkhill. The length of the Stratford Road grew into a continuous shopping street. On the Balsall Heath side of Sparkhill where housing was of poorer quality considerable blocks were rebuilt from the 1970s. However elsewhere large numbers of Victorian houses still provide good servive into the 21st century.

Other reminders of the population boom of the late 19th century include two churches: Emmanuel on Walford Road was designed by W H Bidlake in decorated gothic style and consecrated in 1901. Although this Grade II Listed church was enlarged in 1927, it was never completed and the nave is rather shorter than originally intended. The church closed in 1990 and the parish amalgamated with that of St John, Sparkhill. The building was converted into flats for the elderly by an Asian housing association.

Well worth a look: St Agatha's Church on the Stratford Road at Mole Street which was also built by Bidlake in Arts & Crafts gothic style at about the same time. Largely paid for with funds from the sale of Christ Church in New Street, it is not only Bidlake's best church but is held by the architectural historian Nikolaus Pevsner to be 'one of the most original and successful churches of c1900 in England.'  This is an important Grade I Listed building.

The foundation stone and font of Christ Church were placed in the baptistery; the clock and bell were also brought here. The chancel was built at the west rather than the traditional east end to be away from the traffic noise of the Stratford Road.


During the Second World War the tower was badly damaged by German bombs but was subsequently repaired. Much of Bidlake's internal furnishing and decoration was also destroyed and again damaged by fire in 1957.

However, the stone carvings are original as designed by Bidlake. On the tower there stands a large statue of Christ in Majesty surrounded by angels, while tympana reliefs represent St Agatha in chains visited by a vision of St Peter, and being burnt rather than break her commitment to Christ. There are angel finials on the tower, cherubs around the porches and the inscription: Enter into his courts with praise & Enter into his gates with thanksgiving. Inside the church corbels represent the heads of St Agatha and St Peter and other Bidlake designs include ceiling bosses and pillar capitals. The war memorial is a sculptured frieze by the Birmingham artist O E Collins and depicts Christ surrounded by soldiers, sailors, and airmen. There is a 8½cwt chiming bell in the tower.

Christ Church in Grantham Road was built in rock-faced stone in gothic style with many gables. This church dates from the early urban development of the district and was consecrated in 1867. The spire was removed 1918 and the tower demolished after World War 2 as a result of German bomb damage. The church was so badly damaged by the Birmingham tornado in 2005 that it has been demolished. A health centre has been built on the site and a church-cum-community centre has been built diagonally opposite. The eagle lectern and some stained glass windows have been retained from the pd building

A surprising number of Victorian school buildings survive in Sparkbrook. On the road of the same name, Stratford Road Board School, now Ladypool Primary School opened in 1885 for almost 1000 pupils. The building was designed in gothic style by Martin & Chamberlain for the Birmingham School Board in red brick with terracotta dressings and timber-framed gables. The prominent spired tower, which served as a ventilation shaft, was badly damaged by the Birmingham tornado in 2005 and was demolished.

The former schoolmaster's house still stands at the south-east corner. This is a good example of a Victorian board school and is Grade II* Listed. The number of pupils soon outstripped the accommodation and the building was enlarged in 1893 and again in 1898. In 1936 the school was reorganised for juniors and infants school.

On the Stratford Road Christ Church School was opened in a private house in 1867 at the same time as the church in Grantham Road. Accommodation soon proved inadequate and the school transferred to a borrowed saw-mill building in 1870 which it used until the new building near the corner of Long Street and the Stratford Road opened the following year with accommodation for 565 children.

The school transferred to a new building in 1958 in Claremont Road, and the old building was demolished for housing in the early years of this century.